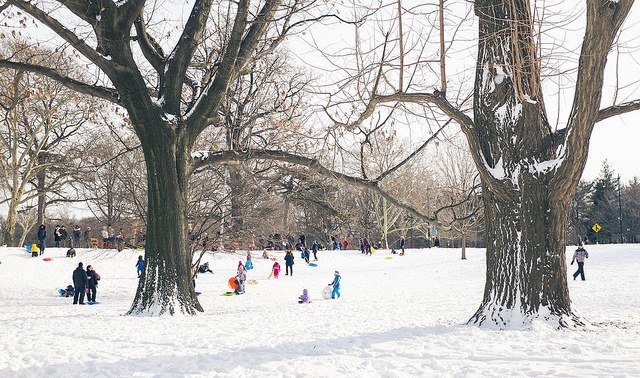 Whilst some sheltered at home, this couple spent their time enjoying the snow. (Photo by Adrian Cabrero) Although it’s snowing, some are always ready to enjoy the sea. These surfers took advantage of the day to train at Rockaway.(Photo by Andreea Waters) By the end of Tuesday, there wasn’t a storm but it was still a snow day for students. Time to make the most of the snow! (Photo by Eric Konon) There were those who enjoyed Tuesday better when in the end, there was no blizzard in New York. (Photo by Joshua Pomales) Someone must have been thinking about the New York Mayor’s big forecast for Tuesday. (Photo byAdrian Cabrero) Pretty picture of the snow when it began to fall on Monday. Buses had difficulty getting about. (Photo by Metropolitan Transportation Authority of the State of New York) Central Park was the perfect place to wander about on Tuesday, although not for those who wanted to drive. (Photo by Charley Lhasa) Times Square on Monday, which had the most snow fall during the storm. (Photo by Metropolitan Transportation Authority of the State of New York) Of course! Sport first and foremost. (Photo by paula soler-moya) Grand Central is already beautiful enough, but with the snow it made for some iconic photos. (Phoyo by  Metropolitan Transportation Authority of the State of New York)

And for an added bonus: The snow view from our very own window at different hours of the day 😉