The Art of the Ronqueo del Atún: A Unique Culinary Experience 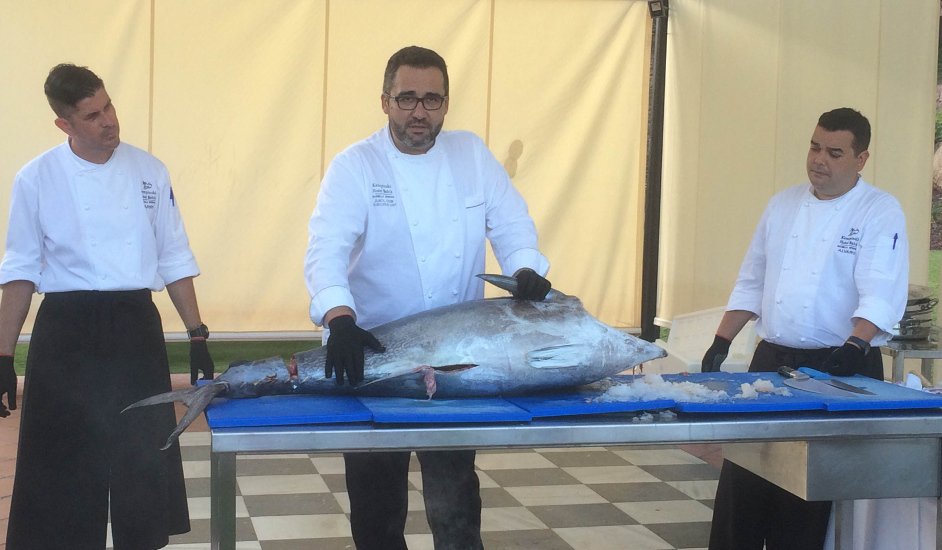 The ronqueo del atún is an art. And to prove it, Chef Raúl Cob of the Kempinski Hotel Bahía prepared a 70kg tuna before our eyes.

As he readied his knife, Chef Raúl Cob asked the crowd gathered at the Kempinski Bahía in Estepona (Costa del Sol), “Do you know why they call it a ronqueo?” He skipped a beat before continuing, admiring the enormous 70 kilo fish before us. “It is because of the sound that the knife makes when you cut the tuna. It sounds like a man snoring or his ronquido.” As Chef Cob and his team expertly cut the tuna, they explained each step of the process and how that part of the fish would be used. The beautiful fillets, the rich belly or ventresca, the head, “the tuna is like the pig,” the chef told us, “we use every part.”

One of the most surprising moments came when Chef Cob finished cutting the tuna. A waiter brought out spoons for everyone and we were encouraged to step up and try the freshest meat right off the bones of the tuna. It was totally unexpected and it couldn’t have been more fresh. A delightful way to begin our tuna tasting menu.

As Chef Cob and his team worked to prepare the tuna, we were invited to take a seat at one of the Hotel Kempinski Bahia’s restaurants. There are four on the hotel grounds (The international cuisine of El Mirador, Japanese-Spanish fusion inspired Oushi Toro, Alminar Wine and Steak House and the Cabaña del Mar.) We would be dining at the Cabaña del Mar or “Seaside Hut.” The views of the beach sunset were spectacular and the breeze was very welcome on a warm August evening. The already perfect scene was made even better when the waiter offered us a glass of cold cava as a welcome drink.

The tasting menu consisted of five dishes and a dessert with the option to order a second serving of any of these dishes or simply enjoy a tuna steak grilled to perfection. Along with each dish, the hotel’s expert sommelier, Ana, paired a perfect wine to go with the dish. We began with a laugh when Ana came to our table since she didn’t realize we spoke Spanish! Since the event was being held in English for the hotels international guests, she began her explanation of the sherry from Jerez (Cádiz) in impeccable English only to discover that Pedro was born just down the highway in Málaga City.

The dry sherry went perfectly with a plate of mojama (a cut of salted tuna which dates back to the Phonecians who used to salt the tuna to prepare it for trading.) Now these thinly sliced cuts of tuna are delicious when paired with almonds or in this case a bit of fresh tomato. The sherry contrasted wonderfully both with this dish and the sushi that the waiter brought us in quick succession.

Ana returned with a second wine. This time it was a white moscatel wine that would go well with the tuna tartare and the sesame seared ventresca. The dishes were two of my favorites from the night with the perfect combination of flavors. The sesame seared tuna seemed to melt in your mouth and the sweet wine only helped to accent it’s rich flavors.

The next dish was a small portion of a hearty stew typical in the Basque Country. It was a marmitako made from the cuts of meat taken from the tuna’s head, as well as potatoes and a deliciously rich red sauce. This was one of Pedro’s favorite bites. It’s always interesting to us when chefs are able to reinvent the traditional dishes of Spain which were originally meant for simple fisherman’s fare. After all, these were the cuts of tuna that were “less desirable” at the market and potatoes to thicken it up. All I can say is thank goodness for the fishermen centuries ago, because it was superb as paired with a Radix Syrah.

Before the dessert course, we asked Chef Cob to prepare a small tuna steak for us to share. It was, perhaps, one of the simplest dishes of the night, but the quality of the fish shone through. Tender and perfectly grilled, we were happy to have ordered this last dish. For dessert, a spicy ice cream with mango pureé and bits of tuna. This dessert is regularly served at the hotel’s Japanese fusion restaurant, Oushi Toro. The flavors worked together quite well, especially when paired with a small glass of Japanese sake. It was the perfect end to a delicious meal.

As we enjoyed the sunset, we couldn’t help but think that we’ll have to return to the Kempinski Hotel Bahía soon. In fact, there is another culinary event that’s caught our eye coming up in just a few weeks. On September 7th and 8th you can “Dine with the Stars” as the hotel invites three Michelin starred chefs to create a 12 course meal using the fantastic local products of Andalucia. The chefs, Jaume Puigdengolas from Skina, Diego Gallegos from Sollo and Mauricio Giovanini from Messina, will each prepare three courses of the meal, so it’s bound to be delicious. For more information or to reserve your space at “Dine with the Stars” follow this link.