Aegina Island is a beautiful Greek Island close to Athens Our last day in Greece began with a lot of running around. We took the metro to the port of Athens and found a little building that sold us tickets to a ferry boat that would take us to the island of Aegina. This is not one of the most beautiful Greek islands, but it is located rather close to Athens, and would allow us to spend the most time there. On the boat I was impressed by the clear blue green water and the beautiful landscapes. Upon getting off the ferry we learned two things. First, that the island was just what we were looking for, and second that they sell pistachios there. We bought a bag without thinking twice and began to explore the small city. We found a church, some very typical looking houses and streets, and then, the bike shop. The man who rented bikes was able to convince my friends and I that it was a great idea to rent bicycles, despite not having ridden in many, many years. So off we went, around the periphery of a Greek island. It was as if we were in a movie. The views were spectacular, the wind in our faces, the sun dancing on the water. It was an unforgettable morning. For lunch we stopped at a tavern that was located about half way around the island. The place was family owned and very casual. We shared stuffed grape leaves, meatballs and calamari between the four of us. And then, after eating there was a small mishap on our trip back to the main town. The roads on the island were quite narrow, and as a car motioned to us to change to the other lane, my friend fell off her bicycle. The driver stopped his car, and proceeded to yell at us in Greek and a bit of English. Apparently they were just trying to warn us, but it had caused my friend to fall and almost break the rented bicycle. Upon returning to the town we got an ice cream to console ourselves. Back at the hotel we took time to shower before eating dinner. We wound up back at the same restaurant as the night before due to the fact that we had enjoyed it so much, and all the places were rather touristy. If I were to return to Greece I would try to get better information about the local places, but this time the preparation was minimal, so we just enjoyed the food and wine. For dessert, we found a local pastry shop and bought baklava (a traditional Greek pastry made with nuts, honey and flaky pastry dough) and another pastry with some sort of cream cheese filling that we dubbed “cheese delicious,” although I never did learn the real name. All in all, I had an amazing time in Athens! The food was outstanding, the landscapes breathtaking, and the historical landmarks were everything my history class promised. I would, however, advise that people spend no more than a day and a half in Athens, as it is very much a city with lots of people, grit, and tourists snapping photos. One day I would like to travel to more islands, try more local spots, and see the countryside, but then, it’s always good to have a reason to go back, right? 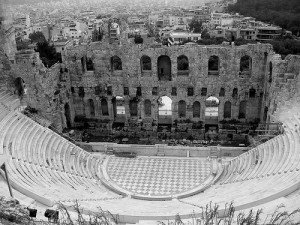 Things to do in Athens: Experience the charms of the city