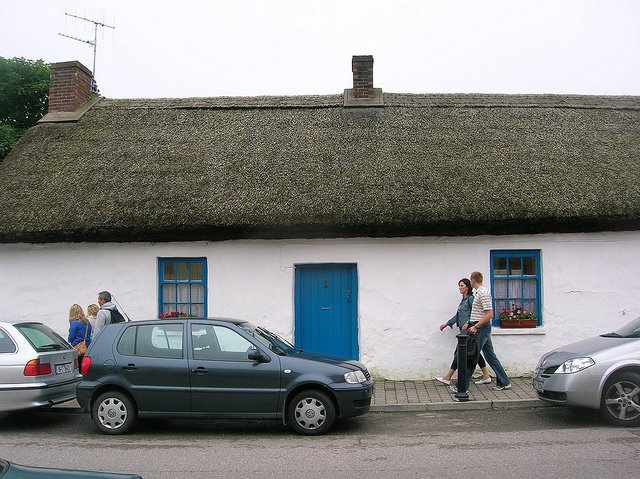 We visited the town of Ardmore on a foggy Saturday when the town was celebrating its Pattern Festival. From what we could tell, the festival is usually a bustling event occasioning the use of busses to bring people from the outskirts of town to the port where the festivities were concentrated. Unfortunately, we were unable to enjoy much of the festival due to the inclimate weather. Apparently a lot of the events had been postponed or canceled, and the most exciting bits we were able to witness were a sandcastle building contest, a small petting zoo and some local musicians singing covers of pop music. Regardless, there are several things in the town of Ardmore that will warrant a visit, and leave you feeling glad you came. The small town of Ardmore can be found in the county of Waterford, on the Southern Coast of Ireland. The name of the town, from the Irish “Aird Mhór” meaning Great Height. This is believed to be one of the oldest Christian settlements in Ireland dating back to the period of Saint Declan (350-450 AD). It turns out Saint Declan was the one who Christianized the area before Saint Patrick. The first thing I remember noticing about the town were the houses with thatched roofs. I think the only time I ever saw a thatched roof was in a children´s book when I was small. In United States, this tradition clearly did not survive, and as far as I know, Rusko never saw any in Málaga either. The houses were short, painted white and had the infamous roofs made by binding many sticks together in bundles. We walked down the main street, past pubs and coffee shops stopping in one to have some coffee and a bun (which in America I think you would have to call a muffin, and in Málaga, a “Magdalena”). It was an interesting little café with chairs that were creatively designed and artwork by a local painter hung on the walls. We sipped our coffee, because, although we were visiting in summer, it was chilly outside. Next we walked down to the edge of the water, where (had it been nicer weather) we would have taken a walk up the coast line to enjoy the beautiful views. It’s true that the Irish landscapes are amazing. After seeing the coastline we walked to the round tower. We had to walk up the hill through the fog to see this 12th century tower and the ruins of a Cathedral and oratory that dates back to the 13th and 8th century respectively. You can see carvings on the walls of the cathedral, as well. We visited on a particularly foggy day (hence why we did not venture up the cliffs to take the scenic walk), and it was really impressive to see not only the ruins, but also the views from the hill top. This was nothing like anything I had seen at home in Pennsylvania, and very like the idyllic images I had seen in text books and travel brochures of Ireland. I think sometimes, especially for Americans, we are almost too easily impressed by historic ruins due to the fact that our own country is so young in comparison. After seeing the ruins of the church, we headed out of town (especially because the weather was looking more and more threatening (although I will admit there were several restaurants that looked quite cozy if we had wanted to enjoy our lunch in the quaint little town.) I would ruskommend a visit to Ardmore with 4 boquerons. While it is not an essential stop in Southern Ireland, its history and typical homes, along with its coast line and gorgeous landscapes make it a great stop if you have the time.