Limerick is the city in Ireland declared City of Culture 2014. Its viking past gives the city a unique charm, where you can still see the ruins of the old city wall and the castle. Although, it is one of the cities where it rains the most in Ireland!

The first thing that probably comes to mind when I mention Limerick is a poem you learned in grade school or perhaps something that begins “There once was a man from Nantucket…” While some Limericks are tasteful, and others less so, the name of this sort of verse is thought to be derived from a parlor game that included the refrain “Will (or won’t) you come (up) to Limerick?” One of the first Limerick poems was published in 1880 in a New Brunswick newspaper: There was a young rustic named Mallory/who drew but a very small salary/When he went to the show/his purse made him go/to a seat in the uppermost gallery.” 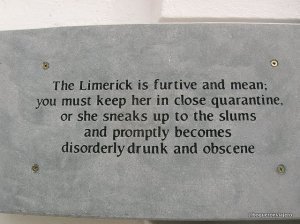 Our visit to modern day Limerick began with a several hours bus ride from Youghal in County Cork north of Limerick. This required changing buses in the city of Cork and therefore, we arrived right at lunch time. Seeing as how we did not want to waste any of the day in Limerick (our time was, unfortunately, limited) we had a quick sandwich and set off in search of what Limerick had to offer.

The first stop was St. Mary´s Cathedral. The Cathedral was founded in 1168 on the site of an old palace. It is interesting to note that parts of the palace are most likely incorporated into the present day cathedral. You can see this on the West Door which was probably the main entrance to the palace. It was also the center of government in the early medieval Viking times. It is, in fact, one of the oldest and most historic buildings in Limerick. What we were most impressed by was the cobblestone path and the beautiful Celtic crosses in the small adjacent cemetery. It was definitely one of those places that made you wonder what it would have been like 1,000 years ago to stand on that very spot to witness a Viking meeting.

We continued toward Island Road where you can see the remnants of the old city walls. The walls were erected in 1237 and separated the citizens of the city from the other inhabitants of the island (presumably not wealthy enough to live in the city center. The walls were taken down in 1760, but there are some remnants that you can see along Island Road. This stop is a bit out of the way as you walk toward King John´s Castle, but it is interesting to see what used to be the edge of the city. Perhaps it is the American part of me that associates walled cities with literature and romanticized history, but I can´t help but imagine living in a place that needed to be protected by such impressive stone structures. Quite possibly I would not have been a good resident of medieval Europe with my lack of bravery in times of distress. 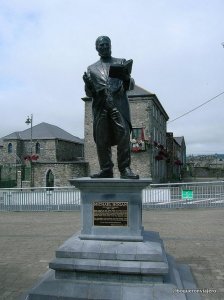 As we rounded the bend of Island Road we began to see King John´s Castle of Limerick. It is important to note, however, that the city of Limerick was originally a Viking settlement dating back to the year 812. The Normans then came to the city in the 12th century and King John´s Castle is one of the more notable pieces of architecture left from that period (the other being the aforementioned St. Mary´s Cathedral. The city was later besieged by Oliver Cromwell in 1651 and twice by the Williamites in the 1690s. The history was well explained in a filmstrip inside the Castle visitor´s center before we were left to explore the castle grounds. I enjoyed going up to the top of one of the towers and seeing the views of the River Shannon and the city. Ireland has such beautiful landscapes that it´s easy to imagine how the land must have been before there were such large cities, and the views from the top of the castle did not disappoint.

Having left the Castle we walked back toward the center of town crossing over the River Shannon and passing in front of the Old City Courthouse and Gerald Griffin Memorial School, which dates back to 1640 and is located across the street from Merchants Quay. With the great help of a map provided by the tourist information stand we continued our visit at The Milk Market. This is an open air market that has been around since 1852 and is open Fridays, Saturdays and Sundays. The day we visited, however, there were not many people because of the hour and it being a Sunday. We were able to visit a shop with fancy chocolates and artisan cheeses, as well as see a few vendors with artisan crafts such as knit scarves and broaches. As I say, it was lacking in atmosphere, but a marketplace with such a long history is definitely a place to see. 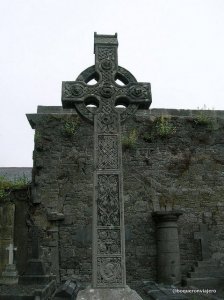 We continued walking in the area of the Milk Market to visit St. John’s Square. The square was built in 1751 and restored in the 1970s. This square is easily identifiable because of the extremely tall church spire at St. John´s Church. It is, in fact, the tallest spire in Ireland. The area was nearly deserted at the hour we visited, so it was easy to imagine what it might have been like in the 18th century when Edmund Sexton first had the enterprise to construct the square.

By this time, we needed to get back to the bus station, as it was getting late. But we left Limerick with the sense of a city that has seen a lot of history. It´s amazing to think that the same place that the Vikings had settled so many years ago continues to be the third largest city in Ireland. I will warn you, however, that it is also one of the cloudiest cities, so be prepared for a grey day if you visit. We ruskommend all the things to do in Limerick with 4 boquerones.

Things to do in Limerick that you can’t miss!