Youghal is a small and historical town on the Irish coast

The small town of Youghal (Ireland) is found in County Cork. This time, we decided to purchase a traveler’s insurance, although in the end it wasn’t necessary. Youghal might be a bit touristy, but it still holds lots of Irish charm and history. The name of the town has a strange pronunciation (yawl) and it comes from the Irish Eochaill meaning “yew woods”, which were, at one time plentiful in the area. The town´s history dates back to the year 1209, but there is evidence of a Norse settlement in the area as early as the 9th century. This village has a well preserved history, and is often used as a back drop for films including the 1954 production of Moby Dick.

We begin our visit to Youghal by passing the lighthouse on our way into town. After passing through the lush green countryside on a twisting road from the city of Cork, the bus will leave you off at the edge of town just by the coast and down the hill from the white light house. When I first arrived I remember being impressed by the cold and foreboding waves on the rocky coast. Although it is a seaside resort, I am used to a warmer climate for my beach get aways (in America my family always went in mid July to the Delaware coast, and here in Spain we have traveled to the coast.)

The light house is painted white and dates back to the year 1202 when the towns people built it on the side of a cliff at the west side of the mouths harbor. The original tower was seven and a half meters tall and three meters in diameter. Then, the founders of the town decided that they would need someone to keep the lights burning, so they decided to build a nunnery across the road from the light house, and the nuns looked after the light house until the 1530s and the Reformation. The current lighthouse is not the original structure. It was made from granite imported from Scotland and constructed in the year 1852. I found it to be a welcoming sight as we descended the hill which would bring us to the town of Youghal.

As you continue through the town, you will notice that the houses are painted bright shades of purple, green, blue, and even pink. I had never thought about why one might choose to paint their house purple or bright green, but after spending some time in the grey rainy Irish coast, I can understand perfectly where these brightly painted homes serve to cheer up the winter days. I was particularly drawn to the doors with their intricate windows and brightly colored paint details.

Soon you will come to a fork in the road. If you go to the right you will be continuing along the shore of the Blackwater River and you will come to the port. Here you can go fishing in the summer, and there is a small family beach. I couldn´t get over the fact that local boys, who seemed to utterly disregard any concept of danger would jump off the edge of the pier into the cold water of the estuary. We also watched children catching crabs, and small fish at the rivers edge, or families enjoying picnic lunches near the water. You will also come to a visitor´s center near the port, where you can pick up maps which indicate a walking tour of historic Youghal, and a small exhibit where you can learn a bit about the history of this small town, as well as pick up some souvineers in the small gift store.

If, however, you follow the path that goes left, you will pass by a movie theater that dates back,to the 1950s, at least, and several bed and breakfasts with their gardens overflowing with bright flowers and green lawns. There is also the undeniable force of modernity with fast food take out places, a Chinese restaurant and a fish and chips establishment that looks as dirty as any greasy spoon diner I have seen in New York City. But, as you continue on your way, you will come to the famous clock tower, indicating that you have, indeed, arrived in down town Youghal.

The Clock Gate Tower was built in 1777 on the site of Trinity Castle, and it formed part of the town´s fortifications. It was also used as a prison during the rebellion of 1798. It then served as a place for hangings. This ghastly landmark saw all kinds of torture including hangings, thumb screws, pitch-cap, as well as flogging. I am not exactly sure what all of those terrible punishments entail, but from the sounds of them, it was none too pleasant.

Next to the Clock Gate tower you will find the Rendez Vous Café, and a small passage way which will lead you up the hill toward St. Mary´s Collegiate Church and Cemetary. This is one of the oldest Christian sites in Ireland. It was thought to be founded by St. Declan around the year 450 and the church was rebuilt in a Romanesque style in the year 750. It is one of the few remaining medieval churches in Ireland that has continued to be a place of worship. In fact, the Vikings used Youghal as a base for their raids on various monastic sites along the coast of Ireland, and St. Mary´s Collegiate Church still shows the etched outline of a longboat. I got the chance to wander around the cemetery of this historic church, and I have to admit that it really did evoke all sorts of history, what with the Celtic crosses, moss growing over the grave stones, and brightly colored flowers peaking out along the edges of the church grounds. As we visited the cemetery on a typically Irish misty afternoon, there was the added eeriness of the fog, as we picked our way through the ancient graves. One can only imagine what it must have been like all those years ago when the Vikings were raiding the coastal towns.

If you continue up the hill, you will come upon the city wall. Youghal is one of Ireland´s few walled coastal cities. The exact date of their construction is unknown, but the earliest mention of the walls was in a charter from the year 1275. The walls mark the boarders of what were originally the town limits. Inside the town, there are several archways that indicate the limits of these walls. One such archway is called Watergate, and it was the walled port´s most important gateway connecting the town to the sea. All the trade, merchants, soldiers and adventurers had to pass through this arch. Some of the more famous names to cross its threshold are Sir Walter Raleigh and Oliver Cromwell.

Heading back towards the port, you will find an inn/bar famous for being featured in the movie Moby Dick. Here you can stop in to try a glass of hard cider (be careful- it is stronger than you might think) or a typical Irish beer with views of the coast. Other typical sites in Youghal include the town hall, erected in 1753, and the Alms Houses which date back to the 17th century. There are, of course, also many typical Irish pubs. One night we were lucky enough to hear a local musical group singing some traditional Irish songs accompanied by a bagpiper. There are lots of little shops including a stationary store where the owner is happy to point you in the right direction if you are lost. Overall, we enjoyed our visit to Youghal, thoroughly and we ruskommend a visit to this seaside town with 4 boquerones. 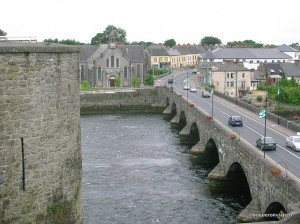 Visit Cork in one day – I became a city person again 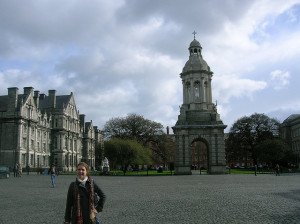