The Neue Galerie shows 20th Century Austrian and German Art and this mansion turned museum on Fifth Avenue is a stunning place to spend the morning.

The Neue Galerie in New York is a museum dedicated to early 20th century German and Austrian art. It is an historic building that dates back to 1914 and was designed by the same architect as the New York Public Library. It is protected by the New York City Landmarks Commission and is one of the more impressive buildings you will find along Fifth Avenue. When we arrived, the museum had a line around the block, but it moved quickly and within 10 minutes we were inside.

The museum’s collection is displayed on two floors, so while there are a limited number of people allowed in the gallery at a time, it is also a museum that doesn’t take long to see. The permanent collection features works by Gustav Klimt, Egon Schiele, Vasily Kandinsky, Paul Klee and Franz Marc to name a few. These works are all beautifully displayed in the mansion which has been perfectly restored and converted into a museum space.

When we visited the Neue Galerie, the rotating exhibit was titled “Klimt and the Women of Vienna’s Golden Age, 1900-1918.” The main room on the second floor was dedicated to some of the most famous portraits Klimt did of high society women. Perhaps the most recognizable among these works was the portrait of Adele Bloch-Bauer, in tones of gold, all textures and shapes engulfing the portrait in a sort of halo effect. There was also a room of sketches and period-inspired dresses inspired by Klimt’s muse, designer Emilie Flöge.

On the third floor I loved the room filled with works by Fauve artists. These were part of the “Masterworks from the Neue Gallery” which celebrated the 15th anniversary of the museum. At the entrance to the gallery the explanation on the wall detailed that for the curator a “masterwork” was one that made you stop and say “oh my God” because it was clear that this work was significant. He also made the important distinction that a masterwork does not always have to be done by a famous artist. In fact, many lesser known artists have stunning pieces that could be considered “masterworks.”

The Neue Galerie also holds programs and events throughout the year including films, literary evenings, recitals and family mornings. The Café Sabarsky is located on the first floor and is inspired by the Viennese cafés where intellectuals gathered to talk about artistic life at the turn of the century. Decorated with period objects, this is where many of the recitals at the museum take place. The museum also boasts another café on the lower level called Café Fledermaus with black and white checkerboard tiles and a simpler design. Both places are perfect for enjoying a pastry and coffee after visiting the museum.’

The Neue Galerie forms part of Museum Mile and since it is smaller, it makes a fantastic stop after visiting Central Park or for a change of pace if you’ve already visited the larger museums in the area. An insider tip is to visit the Galerie on the first Friday of every month when it is open free to the public from 6 to 8 pm. Also make sure to check your dates and plan your visit accordingly, as the Neue Galerie is closed on Tuesdays and Wednesdays. We ruskommend the Neue Galerie with 5 boquerones for its exquisite collection, stunning architecture and the enviable cafés. 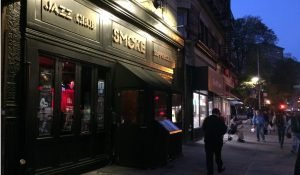 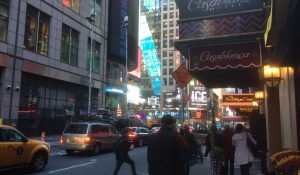 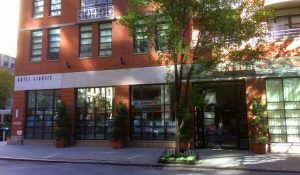