Murray’s Cheese Bar, the temptation of cheese in the middle of the Village

Murray’s Cheese Bar is a temptation for cheese lovers. Since the 40s, this shop started by a veteran of the Spanish civil war has been offering the best cheese in the Village in New York.

There are a lot of things I love about New York City and blogging about travel and food. Chief among them is trying new restaurants, so when my friend asked me “Where can we go so you can write about it on the blog?” The question was music to my ears. We were standing at the corner of Bleecker and 6th Avenue and it was time for a late lunch. Since we were in no rush, we started to wander up Bleeker, which is where we made our decision in about 2 seconds flat: Murray’s Cheese Bar!

I consider myself an amateur foodie, and if you read El BoqueronViajero you will know that I am a HUGE fan of wine and cheese. In fact, when I was little, and we used to visit my grandparents in Hartford, the first thing my grandma would have for me was the special cheese I loved from their local grocers. The idea of a “cheese bar” is possibly the best thing anyone could have invented from my standpoint.

Murray’s actually dates back to the 1940s. Founded by Murray Greenberg, who was, interestingly enough a veteran of the Spanish Civil War, this little shop catered to the Italian neighborhood in the Village and sold cheese and dairy products. It wasn’t until the early 90s that Rob Kaufelt turned Murray’s into a MUST for any cheese lover. At Murray’s you can find almost any cheese you are looking for, in addition to charcuterie and specialty foods. Murray’s even has its own cheese caves below Bleecker street and often hosts cheese classes for those who want to know more.

My own experience with Murray’s was limited to enjoying the delicious cheeses and wandering into the shop to salivate over the different specialty foods as I tried to choose something special to bring for a party or dinner with friends. I had passed by the Cheese Bar many times, but never had the chance to go inside, and I can tell you that it was every bit as delicious as you would expect! 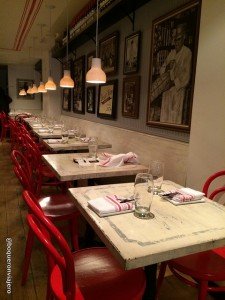 First of all, as you walk into Murray’s Cheese Bar, it is decorated in that perfect clean and rustic way that you hope for in a place known for its wine and cheese. There were worn wooden floors, white tables and happy red chairs all the way to the back of this narrow restaurant. On the walls are tons of black and white photographs including a portrait of a goat with tons of personality. The waiters were attentive and friendly, and we promptly ordered a glass of white wine and then started pouring over the menu. This was going to be a difficult choice! In the end, we settled on sharing a Smoked Ricotta Toast and one of the “masterpiece sandwiches” featuring goat cheese, grilled artichokes, roasted tomato, zucchini, pickled beets, black olive aioli on ciabatta bread.

The first plate to arrive was the toast with ricotta. The dish was plated simply with three slices of toasted bread and a happy little bowl of ricotta cheese with honey drizzled over the top and a sprinkling of pistachios to give a bit of crunch. The ricotta was deliciously creamy and the honey gave just the right amount of sweetness. My friend spotted the only flaw when she matter of factly told me that we would need more bread. She was right, but the waitress brought over some extra slices as soon as she noticed that we had a lopsided bread to cheese ratio.

As we finished up our ricotta toast appetizer, the sandwich arrived. We chose to share a sandwich, as they are quite large, and the chef kindly cut it into two halves and gave us both a little handful of tasty potato chips on the side. It was one of those sandwiches that you will remember for days afterwards. In fact, as I type this I’m remembering just how delicious the goat cheese was and the perfect mixture of flavors. I’m not sure I could say which ingredient put this sandwich over the edge, whether it was the pickled beets or the artichokes, but every bite in this sandwich was sophisticated, just salty enough, and perfectly balanced with the ciabatta roll. This is the type of food you could live off of forever.

I should mention that Murray’s Cheese Bar is also open for brunch and dinner, or any cheese worthy moment you might find in between. I’m dying to go back for brunch, actually! It’s location is great for anyone exploring the Village, easy to find if you are meeting someone, and, clearly the star in this adorable little eatery is the cheese. I ruskommend Murray’s Cheese Bar with a Golden Boqueron for its service, the relaxed setting, and of course the delicious food and drink. A part of the neighborhood for years, Murray’s is a part of Village history, and you definitely won’t be sorry you stopped into the Cheese Bar. In fact, if you’re like me, you’ll be left plotting what to order when you go back next time.