Spending Thanksgiving in New York, what can you do on this day?

Thanksgiving is a day to spend with family. If you are going to celebrate Thanksgiving in New York, you might have dinner in a restaurant, see Macy’s Parade live or choose from the many activities available in New York City.

Thanksgiving is a major celebration in the US. Before meeting Abby, I had never celebrated it and I had always seen it as a foreign concept that had nothing to do with me. Fast-forward to 2009, the year I met Abby, and I was celebrating my first Thanksgiving in Madrid, where we were living at the time. I remember thinking that I absolutely loved the idea of choosing a day to be with family and be grateful for everything we had and, above all, the people we had by our side. From that point on, I haven’t missed a single Thanksgiving and now that we’re living in New York, it’s hard not to. Throughout the article, I’ll tell you about the traditions and activities surrounding Thanksgiving in New York and in general, the US also.

When is Thanksgiving celebrated in New York?

The celebration has its origin in a mixture of European and Indigenous traditions, that were celebrations coinciding with a good harvest. When the Europeans arrived in the US, festivities were also held to celebrate their safe arrival. In New York as well as the rest of the United States, Thanksgiving is celebrated the 4th Thursday of November. In 2014, it’s November 27th and in 2015, it will be November 26th.

How is Thanksgiving celebrated? 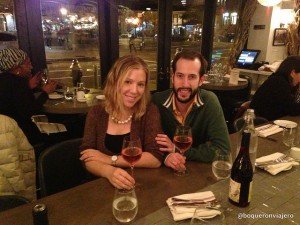 I’ve been lucky enough to celebrate with my family in the States, so I can tell you my personal experiences celebrating Thanksgiving. The day is usually spent with family doing various activities. In the morning, everyone has a special breakfast together while watching the Macy’s Day Parade in Manhattan on TV. Those who live in New York have the opportunity to see the parade live. The breakfast is a bit larger than the norm and you have to make sure you leave space for the huge dinner you will have at about 6 in the evening.

For dinner, the most traditional dish is roast turkey. It can be stuffed but most of the time, the stuffing is served as a side dish. Other side dishes are cornbread with sage, cranberry sauce, green beans, gravy (a sauce made from the meat juices) and something else, usually a regional dish. For dessert, the most popular sweet is pumpkin pie although it’s also popular to serve apple pie.

If you’re not going to someone’s house for a family dinner, but you would like to celebrate Thanksgiving with a traditional dinner, here’s a list of restaurants where we can assure you that their food is excellent. All you have to do is call and find out if they’re serving a special Thanksgiving dinner and make a reservation. 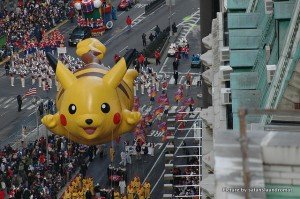 The Macy’s Day Parade is without a doubt one of the most awaited events of the year, not only in New York but just about everywhere in the US. There isn’t a town in any of the country that doesn’t have a TV switched on to follow the parade live. It’s become a tradition that also marks the start of Christmas. Each year, an impressive parade of dancers, floats, film stars and comedians, Broadway professionals and many more attractions, tour around almost 40km from 77th Street in Central Park to 34th Street where Macy’s is situated.

The Macy’s Day Parade is also a unique opportunity to watch Broadway musicals live, without paying a thing. Performances are presented from current shows signaling the start of the Christmas season on Broadway.

After the parade, everyone goes home with their families and the city empties (it is the city that never sleeps, as you well know). New York then becomes the definition of madness. The Christmas shopping season begins and going into the department stores, especially Macy’s, is to take your life into your own hands. However, it’s also a magical time – Christmas has begun in New York and with that comes the lights, the window displays and all the charm that Manhattan has to offer.

Black Friday, the weekend and the start of Christmas 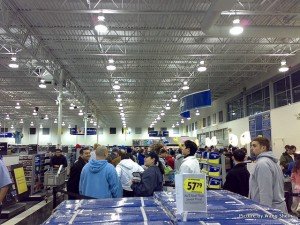 Falling on a Thursday, Thanksgiving gives the majority of people an excuse to take Friday off and spend time with the family on a long weekend. In the country and in New York, Christmas has officially begun and you can see that Christmas trees and lights are on sale and there’s a frenetic atmosphere when out shopping. The Friday after Thanksgiving has come to be known as Black Friday. It’s the day where you will find the best sales in the US (the best day to go to the outlet stores and New York shops, especially the electronic stores).

With the start of Christmas, it’s a good time to stroll by the street markets of Bryant Park or Union Square, drink a hot chocolate, ice-skate or wander about Central Park. And if you want to take advantage of the weekend to the max you could look into buying a New York Pass or City Pass to see all the attractions. If you have any questions about this festive time, don’t hesitate to write to us. Happy Thanksgiving!

New York
Hotel Giraffe, elegance, simplicity and comfort in Manhattan
Analysis & Trends
5 Ways to Make the Most of Your Staycation
Malaga
Hammam Al Andalus, Málaga, Recreating the Nazarí past