We all know that living in New York City can be expensive. Between the delicious restaurants, drinks on rooftops, Broadway shows, world class orchestra concerts and super stars playing at Madison Square Garden, this is not the cheapest place to live or visit. While many of the restaurants and shows are well worth the money, it is always great to find some free fun around the city. Each summer, SummerStage New York attempts to do just that by sponsoring free concerts in all five boroughs. 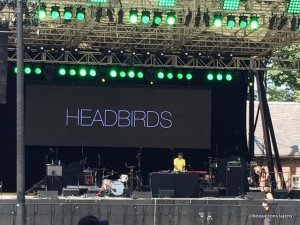 Featuring everything from the Metropolitan Opera Summer Series to Sisquo to Wynton Marsalis. The SummerStage New York series has a little bit of everything. There are concerts and events throughout the summer and the schedule is easy to follow, so you can pick out your favorite events and mark them on the calendar. The only catch is that you might want to come early depending on who is playing, since they are free events and this is New York City, after all.

We recently attended to the Central Park SummerStage 2014 for a show called “Catalan Sounds” where we heard three bands from the Catalonia region of Spain (which includes Barcelona for those of you who may not be up on your geography of the Iberian Peninsula). We arrived early and got seats in the bleachers at the stage in Central Park. There were tons of vendors selling water, soda, beer and wine, even ice cream as well as sandwiches and pizza. The concert stretched over four hours, so it was great to have snacks and bathrooms available.

The groups included Mishima, Txarango and a DJ sets by Headbirds. It was surprising just how many fans there were from Catalonia, as well as New York City. The atmosphere was perfect with the summer weather and slight breeze, and on a Sunday afternoon it was a perfect plan to relax and spend the day with friends. I think the best part was the very end of the show, when Txarango played their easy to dance to songs, and you saw everyone rocking out in their own way to the music. That’s what it’s all about, in the end: everyone enjoying the music, the park and the company for the summer in NYC. We ruskommend that you check out one of the free SummerStage New York concerts with 5 boquerones. It’s well worth the time you spend waiting in line.

Analysis & Trends
5 Ways to Make the Most of Your Staycation
Malaga
Hammam Al Andalus, Málaga, Recreating the Nazarí past
New York
Enjoying the New York of the movies with On Location Tours