Park Slope has become one of the trendiest areas in Brooklyn and probably New York City. Its hipster atmosphere, the short distance from the Brooklyn Nets Stadium and the number of unique places to eat have made Park Slope a reference for people who live in New York City. One day, as I continued down the street, I saw some other shops that I wanted to check out, but as they opened at noon, I was a bit early. Luckily, close by was the locally renowned Gorilla Coffee. Its said that this shop has the best lattes in Brooklyn (and I would venture to say New York in general). Gorilla Coffee the theme of the large primate it is named for, with lots of images in red and black of the head of a gorilla. Even the code to connect to the store´s free Wi-Fi makes reference to King Kong! The décor of Gorilla Coffee is very minimal, with a huge world map on one wall and tables placed together in rows, almost as if it were a public library´s reading room. There were people chatting, but most of all young professionals with their laptops working from their home away from home. I´ve often thought that real work happens in a café. Gorilla Coffee was a dream come true to any graduate student or writer, as the environment is just stimulating enough, but not distracting. The other truly New York part of the café is that you might sit down within a foot of the person sitting next to you, not caring that you are strangers but sharing the table space available. Something happens when you enter the city limits that readjusts your need for personal space (either that or you go crazy…whichever comes first).

The baristas are so nice, and add to the atmosphere. I ordered a maple latte and an oatmeal chocolate chip cookie, checked my email on my cell phone and enjoyed relaxing a bit until the shops opened. I have to admit, the hype about the quality lattes is right. I was pleasantly surprised by both the vibe and the coffee. If I lived nearby, I would make this a regular stop. We ruskommend Gorilla Coffee with 5 boquerones. 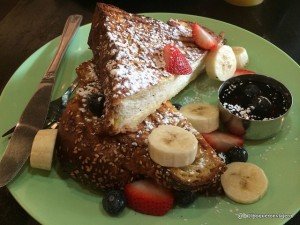 Espresso 77, a neighborhood café to inspire your imagination 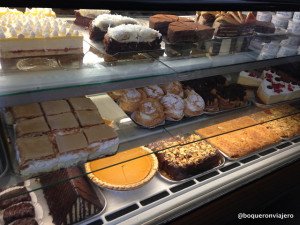 Hungarian Pastry Shop, a place that feels like home 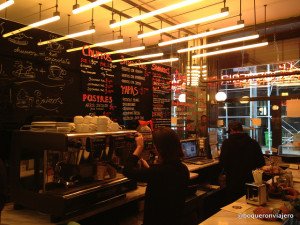