The Balneario de Lanjarón and the hotel, in the province of Granada: a perfect place to relax. The water is well known, and now we know why!

The car swung to the right off the roundabout in the mountains of Granada when we passed a sign pointing to Lanjarón. The modern day windmills grew up around us and it seemed like we were almost as high as they were. It reminded me of Don Quixote and his adventures around Spain not knowing what was around the next corner…and always imagining it to be a bit grander than the reality. Luckily, in this case, the reality was more than grand enough. We wound our way through a few more turns with spectacular views of blue mountains through the mist until we arrived at the Balneario de Lanjarón in the province of Granada.

The word Balneario is literally translated to “spa” or “health resort.” I like to think of the real definition as “heaven.” This particular balneario is one of the best known throughout Spain thanks to the water of Lanjarón which is known for its health benefits. The thermal baths have been around for over 250 years and the rich and famous (including royalty, Virginia Woolf, Betran Russel and Spanish poet Federico García Lorca) started flocking here in the summer.

My mother in law is originally from this small town and she often tells us stories of how in summer the street parties and get togethers never stopped. Her father would come home from work and go to have a drink with friends, sometimes not getting home until the wee hours when he had just enough time to shower and go back to work again. All summer it was a hopping resort town (think the Hamptons of Granada), but in the winter when people didn’t frequent the baths, it was more like a ghost town with just a few families who stayed there year round.

We had come to the Balneario de Lanjarón in January. It was for my birthday, and I have to say I’m glad we came in the “off season.” The four star hotel was quiet as we padded through the carpeted hallways to our suite. We opened the door and the first thing I noticed was the view. We had a private balcony with views of the mountains of the Sierra Nevada. It wasn’t a picture post card of the white tipped peaks, but rather a forest of evergreen trees and a blue sky lit by a warm winter sun. The two wooden deck chairs were perfect for gazing out at nature and disconnecting.

The room itself was divided into two areas with a small living room and the bedroom. Each had their own television, but that wasn’t what I was concerned about. We had come to get away from technology and the stress of work. Of course, it didn’t hurt that my husband had thought ahead to ask the hotel for a bottle of cava and fresh fruit that was delightfully chilling in the room.

The hotel offers several different packages (in the spirit of being a health resort). In fact, you could take advantage of a whole week of wellness. The restaurant combines buffet style service with an a la carte menu, always taking care to include local products. They even have a fountain that is constantly running with the fresh water from the streams of Lanjaron. Each one has different health benefits with minerals and one was infused with iron and natural carbonation. In the hallways, there are vintage advertisements decorating the hotel and I loved seeing the drawings of women lounging on a settee, miniature servants pouring the mineral water into their mouths.

My husband told me that as a child, when his family visited nearby Granada, they used to bring empty bottles and fill them up from the tap water! In town you can see public fountains where people still come to get the fresh spring water. Definitely can’t imagine that in New York City!

Our spa treatments were scheduled when we arrived, and we were instructed to come in the robes the hotel provided for us, our bathing suits and flip flops. The hotel gives you a complimentary plastic cup with little marks for you to measure just how much of the “mineral medicinal” water you are drinking. (I have to say there was one that tasted especially of minerals that did, in fact, remind me of medicine.) You should bring the cup with you as well, when you go to the spa because they have another fountain with the fresh mineral water to drink as you wait for your massage and the water treatments.

We were signed up for a spa circuit with a massage at the end. We began with the “bath of bubbles.” At first I thought there might be some kind of lovely smelling oils involved, but it was more like a jacuzzi bath in a wood panelled room with the healing water. From there we moved to a bed of smooth rocks with cool water spritzing our legs. We also enjoyed the circular shower with jets of water giving you a micromassage all over our bodies.

The only down side to this was the aesthetic, as I think in an effort to be “authentic” to the beginnings of the spa, the tiles were quite stark and with the pipes everywhere, it didn’t make me think of a relaxing treatment so much as some sort of cleansing chamber. Even so, when you closed your eyes, the water micromassage was amazing! One of my favorite parts of the spa was the steam room and sauna with air smelling of eucalyptus and mint. From there we made our way to the massage room and came out feeling completely relaxed.

Of course, there is a whole list of different spa treatments and you can choose which ones are right for you, including cosmetic treatments. In other words, we’ll have to go back! (Maybe a future girls’ weekend away, or an anniversary trip? *Hint, hint*) Our first stay at the Balneario de Lanjarón was everything we could have wanted for a weekend getaway close to home (which for us is Málaga). It was an easy drive up the coast and the roads were well marked, so if you are thinking of taking a side trip on your Andalucía trip, this is a great option.

While you are there, also make sure to try some of the local wine, cheese and delicious “habitas baby” (miniature broad beans served with local iberian ham to give it a flavour that is rich and much more delicious than any broad beans I ever tried as a child!) A perfect weekend of relaxation, good food, and nature. I couldn’t have asked for more on my birthday! We ruskommend the Balneario de Lanjarón with 4 boquerones. 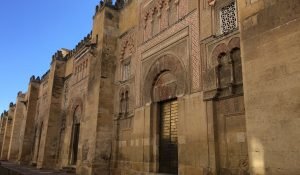 Things To Do in Córdoba: 10 Places You Can’t Afford to Miss