Freiduria Las Flores I Cádiz; the art of fried fish 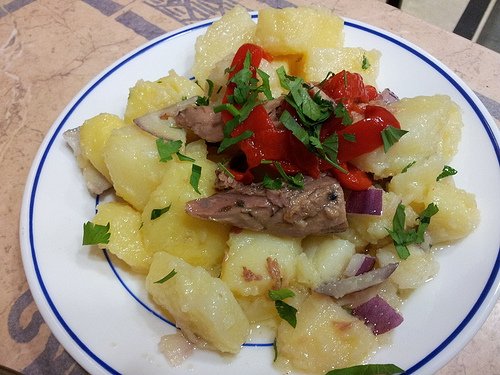 Freiduria Las Flores I: Serving up some great dishes along with cold beer and a fun atmosphere.  The people in Cádiz definitely know how to do it right! 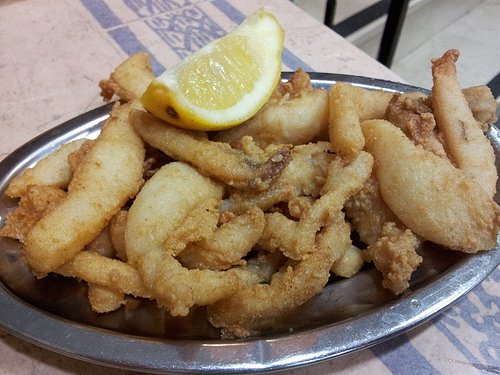 One of the things that you must do when you travel to Cádiz (and as someone from Andalucía I can tell you that this is true in the South in general) is eat “pescaíto frito” or fried fish. And when I say “pescaíto”, I am not talking about the stuff they give you in a lot of places that is fried in oil a few days old and that is too greasy. No, the real fried fish is made with just enough oil and the perfect amount of breading, which allows the flavor and freshness of the fish to come through. So we got down to business and asked the people of Cádiz where they would ruskommend for us to enjoy some authentic fried fish. Almost everyone told us the same thing. The oficial ruskommendation: Feriduría Las Flores I, which is found in the emblematic Plaza de las Flores. 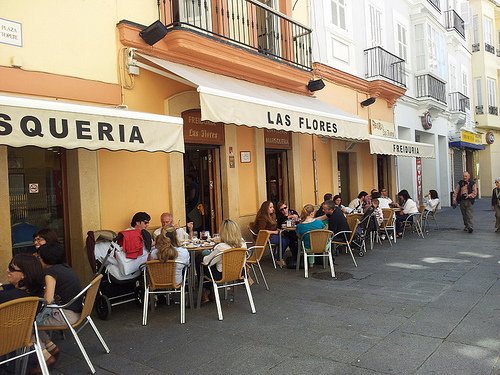 The Plaza de las Flores, in order to get our bearings, is officially called Plaza Topete, although, since it has so many flower stands,you won’t hear it called by its real name. And I think that due to the yummy smells and the bright colors of the flowers, that it is one of the most charming plazas in Cádiz. A statue of the roman Columela presides over the plaza and gives one of the main streets of Cádiz its name. And, in one corner of this plaza, you will find Freiduría Las Flores I. 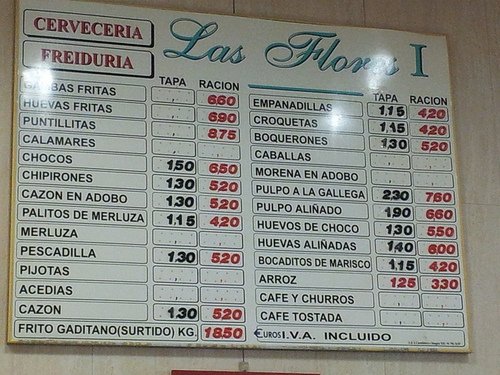 From the outside, at the tables they have set up in the plaza, you can feel the extended atmosphere of Freiduría las Flores I. Tourists and natives of Cádiz meet in the same place to enjoy a cold beer and some servings of typical “pescaito frito”. As you go inside, you can see that it is divided into two parts. The first, on the right, is the bar where you can order something to go, or relax as you wait for a table, which is what we chose to do. And, it was so crowded that we had to ask and then hunt for the waiter to put our name on the waiting list. As we waited, and took a rest from the busy morning that we spent visiting the city, we enjoyed a few beers and a serving of fried marinated dogfish (a white fish with a lemon flavoring) so it didn’t feel like a long wait at all. When they called our name, we paid at the bar and finally we would begin to enjoy some good fried fish. I have to say that even though I’ve been eating fried fish for my whole life in Málaga, I never get sick of it, and when you live outside of Andalucía, a good fried fish becomes a luxary! 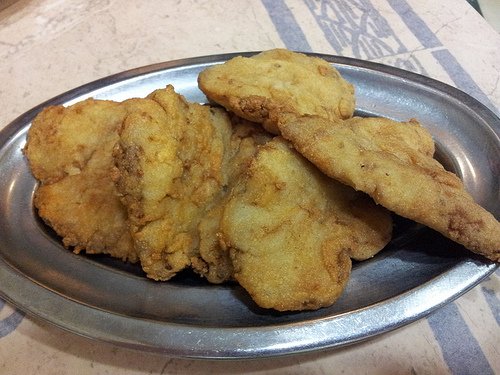 We ordered a couple different things that were typical from the región including fried cuttlefish (chocos fritos), fried baby squid (puntillitas or calamaritos), and of course, the fried shrimp omelets (tortillitas de camarones). As we know in the south of Spain, frying fish is an art which I won’t describe here, but it requires freshness and just the right amount of oil, as well as a good flour. As we expected, the ruskommendations were right on the mark, and we enjoyed our meal very much! 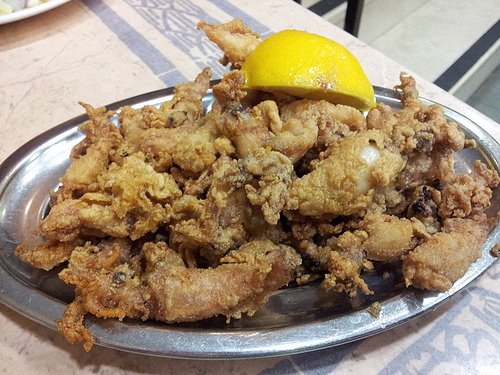 If you put together good food, cold beer and a fun atmosphere, as the people from Cádiz will tell you, a good experience becomes great. What’s more, (and I have to admit that I am used to Madrid prices), the price was more than adequate coming out to about 10 euros per person including beer, our drinks and dessert, and we were more than satisfied. Considering all of this, we ruskommend La Freiduría las FloresI with 5 boquerones, as it is an obligatory culinary stop in the wonderful “Tacita de Plata” or Silver Cup, as Cádiz is popularly known. 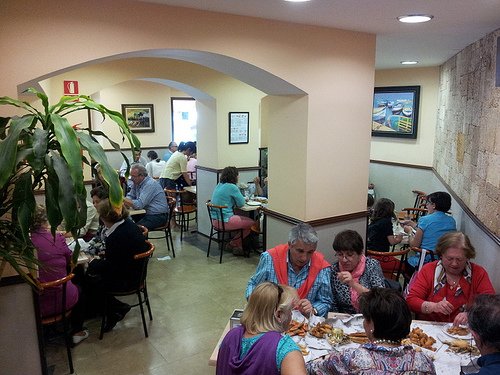 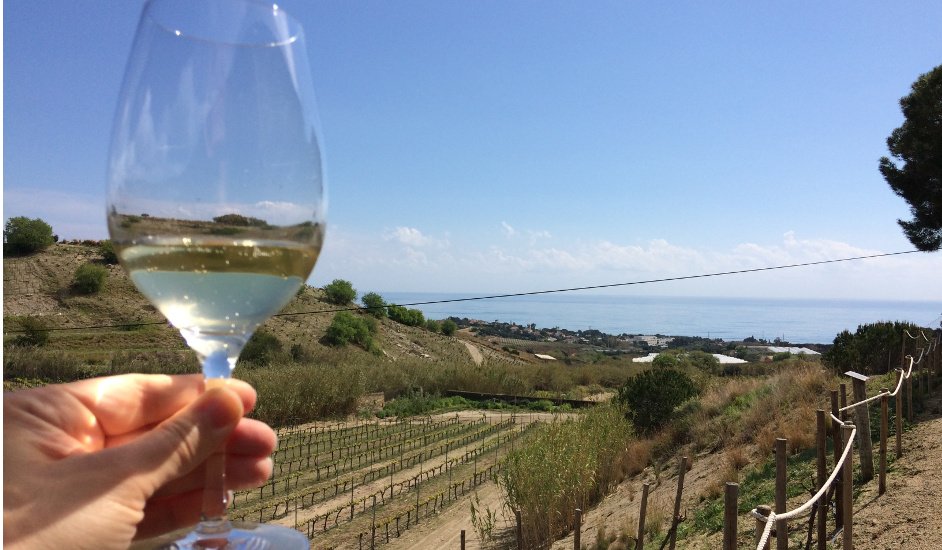 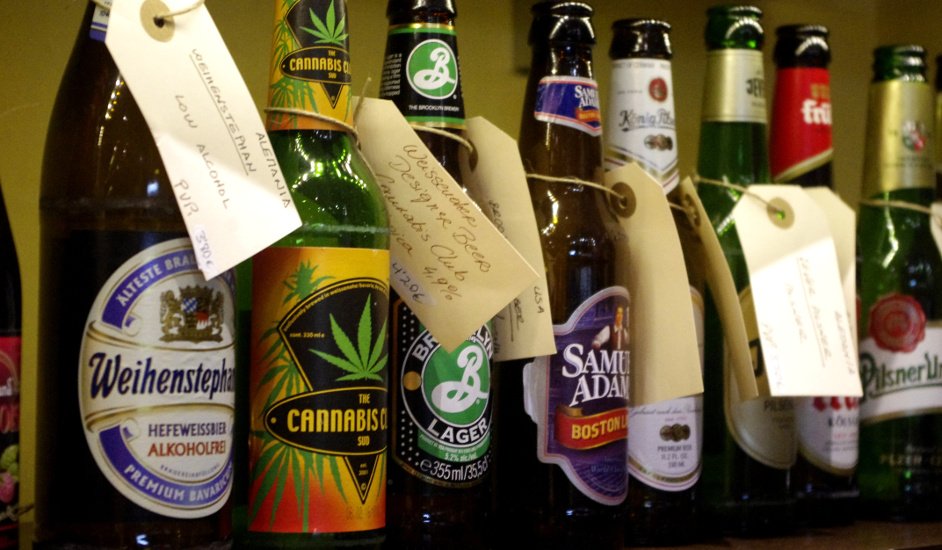 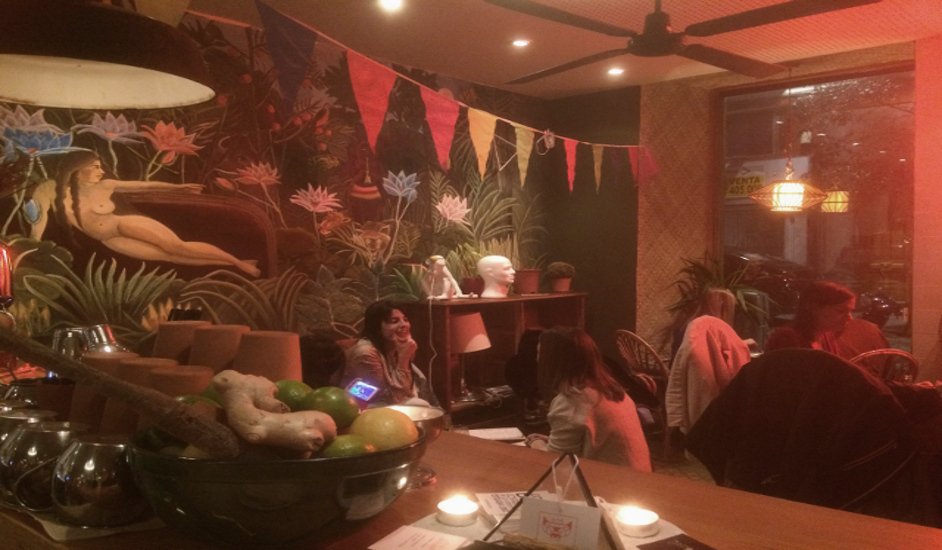