So often flamenco shows are too touristy and lack an authentic feel. However Teatro Flamenco: El Soho provides an wonderful evening of flamenco in Málaga.

The neighborhood of Soho in Málaga is one of the areas that has changed the most over the last decade. What used to be a rather seedy area has been transformed into the “Neighborhood of the Arts.” True to its moniker, the streets are filled with murals painted by famous artists like Shepard Fairey, D*Face and Boamistura. There are adorable cafes with vintage chic decoration (Try the chocolate chip cookies at Picnic!) as well as rooftop views at the Bahía Málaga Hotel. There is even a great craft beer hang out (El Rincón del Cervecero). So when a tiny theater tucked away on calle Vendeja began offering flamenco shows, we took notice.

Teatro Flamenco El Soho is the type of place that you might miss if you weren’t looking for the small entrance a few doors down from calle Tomás Heredía. The cramped lobby leaves space only for a restroom and a ticket window, opening up into the larger theater area. As we walked inside it reminded us of one of the tents or “casetas” in at the fair. One wall was decorated with a false window and numerous potted red geraniums, just like the typical homes in Andalucia. The space was filled with little round tables, each with a flickering candle, facing a small stage.

As soon as we were seated, one of the waiters came over to ask if we cared for a drink. I should mention that there are two ticket options. You can pay 27 euros for the show and a drink or for 3 euros more, you can also enjoy a plate charcuterie and cheeses from Málaga. We ordered a drink and within five minutes the show was starting. Photography and video are not allowed during the show. While some visitors might find that annoying, I was pleased because it takes something away from the art of flamenco when someone is trying to take the perfect Instagram photo.

The show began like many other flamenco shows with a talented group of musicians and dancers on stage with bright lights illuminating their faces and feet. It was a good show, but what makes the Teatro Flamenco El Soho special is that at the end, the artistic director and two of her friends got up on stage to dance along with the performers. So many times when you go to see flamenco, it is a touristy almost “fake” experience. The dancers and musicians, while talented, are catering to a foreign audience. It is an experience similar to those touristy restaurants where they give you a plate of 10 different tapas. There is something “off” about ordering 10 tapas at once, just as there is about sitting and watching flamenco without joining in (at least by clapping or murmuring “olé.”) When I was with a group of friends in Sevilla at the fair, they called me out for not clapping along! It wasn’t natural to just stand there as a spectator!

What I want to point out is that flamenco, much like traditional Spanish food, is not a tourist attraction. You will see people dancing and clapping along to flamenco in neighborhood bars, at weddings and of course at the fair. Flamenco is not something you can “fake.” It is pure emotion and when the dancer and musicians are in sync, the moment is magical. In Spanish the word they use is “duende” and it’s something that gives you goosebumps as a spectator. What I loved about the Teatro Flamenco El Soho was the fact that they broke through the wall of “touristic flamenco” bringing people dressed in jeans and sweaters up on stage.

Of course there are many times that people dance flamenco wearing a beautiful dress with ruffles at the bottom and a shawl with long fringe; but true flamenco comes from within. As the women clapped their hands to their legs and their arms flew in a blur of emotion there was pure pride in tradition, in the music and in showing everyone in the room just what flamenco was truly about. El Soho has found a way to bring a bit of the authenticity into the show allowing us all, for a moment, to participate in something so deeply rooted in Andalucía. An art that is as bewitching as it is soulful, a good flamenco performance is unforgettable, and well worth 27 euros in our humble opinion. 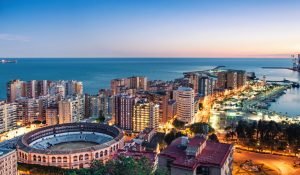 There is a Lot More to Discover in Málaga: 5 Original Getaways