The oldest dolmen of Antequera, Menga, dates back almost 5,000 years.

I’ve been meaning to visit the dolmens in Antequera for a long time now.  While the dolmens of Stonehenge might be more famous, the ones found in Antequera are actually older and larger than those found in England.  With that in mind, it would have been really unforgiveable, to leave Malaga for the United States without seeing such an amazing structure.  The guide that accompanied us was really passionate about the subject and knew how to hold our attention with interesting explanations during our visit to the Dolmens of Antequera: Menga, Viera and Romeral.

Although, from what the guide told us, there is still a lot that we don’t know, but the oldest dolmen, Menga, dates back almost 5,000 years.  Now is when you start to think, “how is it even possible that they did such a perfect engineering job so long ago and without modern day tools?”  And we are talking about rocks that weigh thousands of tons, moved to the exact spot, to the millimeter, put in place perfectly, and just for fun, they used parameters to line them up with certain points or put them so that the maximum amount of light coincided with the solstice or equinox.

I should point out that the Dolmens of Antequera were used mainly as funeral chambers, which means that in addition to practicality, the primitive men were looking for beauty and a way to leave a monument for posterity.  I want to point out the importance of the “Lover’s Crag” (Peña de los Enamorados) at the time.  The theory is that this crag had the shape of a woman sleeping, hence why the three dolmens are positioned the way that they are in relation to the mountain.  The dolmens are lined up so that the center of the chambers corresponds to the crag where you can see the sun set behind it.

We began our visit at the Dolmen of Viera.  There was a logical reason for this: Menga is the best known and most impressive, so seeing it first would have taken away from the others.  This dolmen gets its name from the Viera brothers, who spent lots of time, money and effort in looking for something in the grounds of Antequera that they only assumed might be there.  It appears to have been constructed more than 4,500 years ago, and it has a little corredor that takes us to a small sepulchral chamber which, when you compare it to the adjacent work, must have been used for more than just practical purposes.

I was surprised to learn that the Dolmen of Viera is positioned so that the maximum amount of light from the sun comes in to illuminate the sepulchral chamber during the spring and autumnal equinox. Can you imagine the observational capacity that they must have had to figure this out without any modern day instruments? In fact, on those days there are special excursions for people to witness sun rise from this dolmen.

Although the Spanish, and what’s worse, those of us from Malaga, don’t talk a lot about the wonderful places to visit, the Dolmen of Menga is known world wide, and foreigners (mostly European) come specifically to see this monument.  It is the largest grouping of dolmens in Europe (bigger than Stonehenge in England). They believe it was constructed in 2,500 B.C. which means it would have been made more or less at the same time as Viera.  In fact, there are similarities between the construction of Menga and Viera, but they are completely different from the Dolmen of El Romeral.

After we stepped inside, we found ourselves in a megalithic temple, where there is a sepulchral chamber and a well that was discovered later.  Constructed in the same way I mentioned before, the enormous rocks that form the ceiling seem to be supported by lateral rocks and some intermediate ones, but that is not the case!  You can see, when you look closely that the central rocks are only decorative, and they don’t even touch the ceiling.  To construct the ceiling, they filled the whole area with sand, dragged the huge rocks there, and once they were in place, emptied the interior again.

Our guide also told us that we know from the worn floor that this área was used for animals, storage and for community celebrations (which makes sense because this is a place that would be appropriate for any kind of party).  Just like the Dolmen of Viera, the Dolmen of Menga has a particular orientation and enjoys the most light during the summer solstice.

The Dolmen of El Romeral is not found with the two others, and you have to get in the car in order to see it.  The dolmen can be found at the base of the “Peña de los Enamorados” and it is from a different time period than the other dolmens of Viera and Menga.  This one dates back to 1,800 B.C. and of the three it is the one that has been least investigated, and as such it is less well known and might hold more secrets to be discovered. After passing through the corredor, we found ourselves in an interior chamber that was bigger and protected a miniscule sepulchral chamber where they have found some remains.

The most distinguishing characteristic is the circular shape of the chamber, as opposed to the other two rectangular ones.  It is amazing to observe such a great feat of engineering that was made just by placing the stones in such a way that has somehow created an uninterrupted ceiling that is perfectly flat.  The funeral chamber, interestingly, is not perfectly aligned to the “Peña de los Enamorados”…but could this be a mistake?  Well, the answer is no. It was constructed in such a way that the only day that the chamber is completely illuminated i son the Winter solstice.  They didn’t leave anything to chance!

It was a visit that surprised us as being full of curiosities that I didn’t know existed.  We should really start to be better embassadors for the treasures we have closest to home.  In this case they are as interesting, if not more so, than other places, as well as being associated with some of the great minds of humanity.  We thank the Visitor’s Center and the effort they made to explain everything in such a friendly and enjoyable way.  We ruskommend a visit to the Dolmens of Antequera with 5 boquerones and we assure you that you will be glad you went! 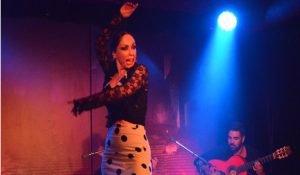