A walk filled with street art in Soho Málaga, a neighborhood reimagined 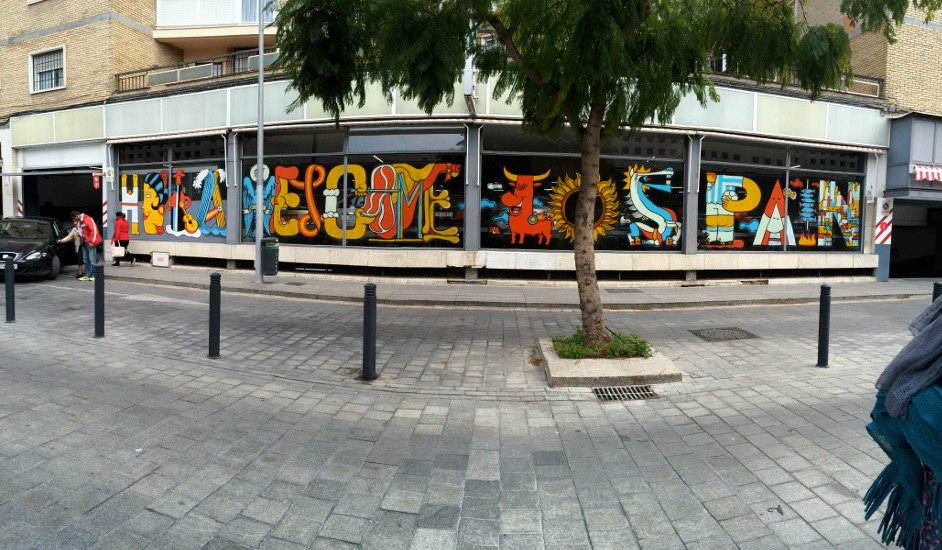 The neighborhood of Soho in Málaga is tucked behind the main street of the Alameda in the historic center. Pedro will tell you that this used to be a rather seedy area and certainly not a place that you would think to take a stroll or have a coffee. Over the past few years, however, all of that has changed through an initiative to make Soho the new artsy neighborhood in the city. Far from being seedy, it’s now the spot for great artisan fairs, boutique hotels, wide pedestrian friendly streets, hipster cafés and a multitude of murals. Welcome to the new Soho Málaga. (And yes, as a former New York resident I do chuckle at the fact that Málaga is nowhere near Houston Street.)

If you are planning to walk around Soho, we suggest you cross the river from the Neighborhood of El Perchel, ending up near the CAC Museum. You can’t miss it because the bridge is painted in rainbow colors by an artist called Pantone. He is actually a designer who often works with geometric shapes and colors, hence the name Pantone. The artist, originally from Argentina now lives in Valencia. Ironically he doesn’t usually paint murals, but rather furniture. This is something unique about the street art in Soho; when the city asked different artists to come and decorate the walls of the neighborhood, they didn’t only ask street artists, choosing to open the doors to all kinds of artists. The result, we have to admit, is marvelous.

If you look down the river, you will see blocks of the river walls covered in tags by the various graffiti artists. This is the result of a kind of party that the city held for different artists to come and put their mark on the river. They could choose a white or black background and then they were free to sign in whatever colors they liked. It might seem odd to paint murals in the river, but in Málaga the riverbed is dry. It’s only opened when there is a flood and the dam is opened. Besides, graffiti and street art has always been a kind of transient art, the artists know it will fade with time.

Back behind the CAC, you will see two enormous murals, perhaps the most famous ones in Málaga (or at least the most photographed). The one on the right is by artist Shephard Fairey. He is well known for the stencils of a masked face that he painted all over various cities in the States. As a political artist, he added the phrase “Obey the Giant.” Along these same lines, you can see that the color and aesthetic is reminiscent of the socialist posters.

The other mural on the building next door is by D-Face. As you can see, the artist was influenced heavily by comic books and works by Roy Lichtenstein. D-Face is always interested in decay and the contrast between good and evil. In this mural you can see one red eye and the other blue. It’s an interesting contrast between the two artists on such a grand scale.

At the school nearby a group called Boa Mistura (The Good Mixture) worked together with local Málaga artists to paint a phrase. The artists were invited to paint whatever they chose on a section of the wall and then Boa Mistura painted white over their work to reveal a phrase: “ El Poder de la imaginacion nos hace infinitos.” (The power of imagination makes us infinite.) The idea is that everyone worked together to create this unique work of art.

As you continue into the neighborhood, there are murals seemingly at every turn. You will see the bearded characters of David Drucall, always trying to reflect the theme of humanity in his work. A huge chameleon greets you at another corner and a few blocks away wirey looking squirrels climb up the building. The phrase “Piensa un Deseo. Ama lo que haces” (Think of a wish. Love what you do.) reminding us to follow our dreams.

One of my favorite paintings, on Calle Tomás Heredia is of a man seeming to whitewash the wall, but instead of painting over graffiti his pot of paint is filled with a Jackson Pollock inspired splatter of colors. There are many more murals in Soho Málaga, and more are being added every day. But if I had to leave you with one piece of advice, it would be to look up. Some of the best murals are painted on high up on building walls, like the birds flying away. The mural was inspired by the real birds the artist saw in the area. In the end a reflection of Málaga, a perfect marriage between art and daily life.

Malaga
The Málaga Neighborhood of El Perchel: A Walk Through History