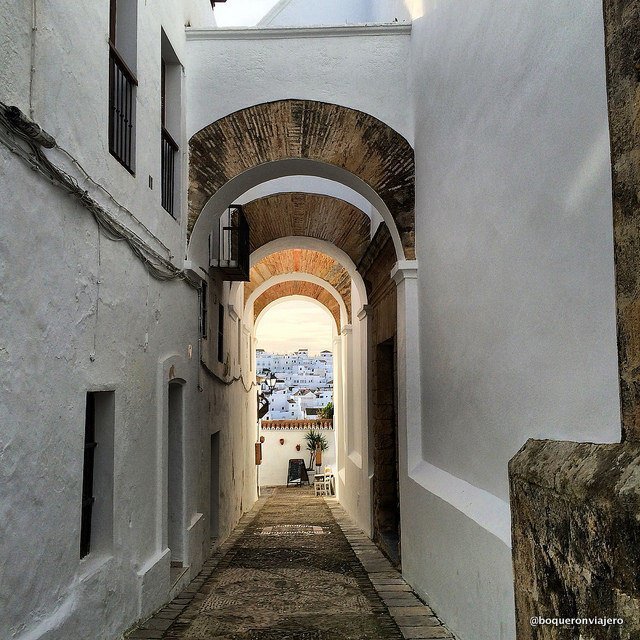 Vejer de la Frontera amazed us. Between its beauty and the charming narrow streets, this white village in Cadiz would inspire anyone.

As our car climbed up the steep hill, leaving behind the green landscape of Andalucía in late December, the small town of Vejer de la Frontera came into view. This was supposed to be the most beautiful white town or “pueblo blanco” in all of Andalucía. This is the stuff of writers who have left behind their native England or Ireland and made a home for themselves in the hills of Southern Spain (actually, come to think of it, I’m not sure how many people have actually done this…but having visited Vejer, I can personally vouch for the idea as a fantastic plan.) Vejer de la Frontera, in the province of Cádiz has been around for centuries. It was home to the Phoenicians, Carthaginians, and Romans and in 711 the Visigoths lost control of the town to the Moors who occupied it until the 13th century when it was captured by Ferdinand of Castile. What does that mean to you? Basically, that this small town that overlooks the River Barbate and surprisingly not overrun by tourists, is just as historic as it is beautiful.

Your first instinct when you arrive in Vejer will be to drop your bags and walk around, just soaking up the white houses, narrow streets and breathtaking views. We won’t stop you. That is absolutely what you should do first. But when you’ve had your fill of the most picturesque little village in your Andalucian imagination, there is still more to see. “Like what?” you might be asking yourself. What follows is a list of 10 places you can’t miss. Vejer de la Frontera was a walled city. The walls are 1.5-2 meters thick and they are relatively well preserved, zigzagging around the town and protecting it from possible enemies. There are 4 entrances: the Arco de la Segur, the Arco de Sancho IV, the Arco de la Villa and the Arco Puerta Cerrada. There are also several towers that you can climb up to get a spectacular view of the town and valley below. We climbed the Torre del Mayorazgo which is found in the corner of an 18th century home the “Casa del Mayorazgo.” The home is typically Andaluz with it’s sunny patio decorated with bright flowers and open to the crystal clear blue skies. The stone steps lead up to the top, and the views are well worth your climb.

The Plaza de España dates back to the 16th century. This plaza was originally designed for watching bull fights, however in 1955 they made a fountain in the center of the square that is covered in gorgeous hand painted tiles in the Sevillano style. The fountain caught our eye immediately, partly because it was the first thing we saw when we drove into Vejer, and partly because it really makes the plaza a place worth visiting. As an american, I have an innate fascination with castles. We clearly do not have any, and it smacks of fairy tales and the knights of the round table. Granted, my view is romanticized and not very realistic considering the military nature of most castles, however, the Castle in Vejer dates back to the 10th or 11th century and it is worth your while for it’s historical value. It is found at the highest point in the town and is classified as one of the “lesser castles” because it only has one entrance. The keyhole door, typical of Moorish architecture opens onto a patio that will surely take you back in time. That being said, we were a bit disappointed that you can only visit the patio because today it is a private home. I guess the castle bit will have to live in my imagination. This convent dates back to the year 1552 and today it is home to the Vejer Museum of Traditions and Customs. If you are interested in learning more about the culture of Vejer, this is a great place to start. If you are looking for the perfect photo of Vejer, you should also stop by this convent, as the “Arco de las Monjas” frames a postcard perfect view of the white houses and blue skies of Vejer.

Here you can get lost in the narrow streets that wind around just inside the town walls. These are some of the most typical streets of the old town and when we visited, the streets were empty, allowing us to imagine what it must have been like in Vejer centuries ago. There are archways, balconies with flowers and impossibly narrow streets. This is where the romance of Andalucía truly lies. This church is located at the highest point of the town, near the Castle. Apart from allowing you great views of the town, the church itself is unique in that it was built on top of the old Mosque. You can see the mudejar construction joined with the gothic style when they built the church in the 16th century. Located in the historic center of Vejer de la Frontera, this marketplace is also a great spot where you can drink some of the local sherry and stop for a tapa. It is best to go for an aperitif before lunch, and you will likely run into some locals who can give you good advice on where to eat. We met a woman who told us to head to the Restaurant Terramar which had a gorgeous terrace overlooking the valley below and the most delicious rice with shrimp. Just 9 km away from the center of Vejer, this beach is part of the Costa de la Luz on the Atlantic Ocean. It is a family beach with good waves for those who are into surfing, however depending on the time of year, it might be crowded. In addition to this beach, the coast of Cádiz is famous for it´s white sands.  If you want more information, click here. In the 19th century, Vejer was known for its windmills. You might know of Spanish windmills from Don Quijote’s fateful run in with the “giants” in La Mancha, however these windmills were constructed to mill flour in the neighborhood of San Miguel. They were run on water due to the fact that the winds aren’t as strong in Vejer as they are in La Mancha. The mills have been preserved as a part of the history of Vejer.

Some of the typical foods from Vejer include “Potaje de castañas” or “chestnut stew.” This stew is made with chestnuts, beans and onions with some sugar and cinnamon to form a thick broth. Another typical dish is “La Poleá” which are similar to “gachas” and are made from flour, milk, cinnamon, sugar and fried bread. Another typical dish is “gazpacho caliente.” You might know about cold gazpacho, well this dish was typical for the men who worked all day in the fields. Of course we can´t talk about food without mentioning the fish, shellfish and amazing wines typical of the region such as Fino Marisquero, Clarito or Moscatel Oro. We should also note that there are delicious pastries to be had in Vejer with a clear Andalusí influence with the “tortas vejeriegas” (a kind of cookie made with cinnamon and sugar) or the “rosquetes” from Holy Week (a kind of round cookie). There are many other things to see in Vejer de la Frontera, especially if you visit during one of the festivals (Holy Week, the “Romería”…) If you go, make sure to let us know and comment with other places to try. I know we’ll be back, so we’re always looking for new suggestions! **We were invited to visit by Cadiz Tourism Office. In no way were we swayed to write a positive review. As always, all opinions are our own.