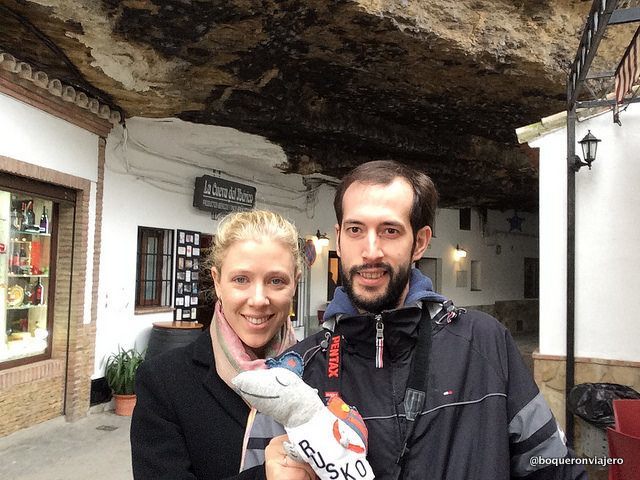 Setenil de las Bodegas is a beautiful town in the Cádiz Province that has the peculiarity of having many of its houses built right into the rocks. Our visit left us fascinated!

The first time I saw a photo of Setenil de las Bodegas was purely by accident while researching the White Towns of Andalusia. I have to admit I was blown away. I asked myself, what would life be like in a town where your house or your neighborhood bar had a mountain of rocks on top of it? How was the town formed? How could such a beautiful and intriguing town in Andalusia exist and I had never visited it during my time living in Malaga? From this moment on I knew I had to visit it. I wanted to see for myself the natural wonders and find out more about its history.

The name Setenil de las Bodegas goes back to the time of the Catholic Kings, when they were advancing to conquer the Kingdom of Granada. Setenil was one of the most troublesome sites to conquer and there were 7 failed attempts to take the city (its name comes from “Septem nihi” Seven nothing, seven attempts resulting in nothing). It wasn’t until 1484 that they finally managed to conquer it. The last bit “de las Bodegas” is due to the huge wine trade that this town had in the past, when nobility settled in the town after the conquest.

What is there to see in Setenil de las Bodegas? What really drew my attention to Setenil de las Bodegas, and I think for many visitors as well, was the town itself – the beautiful streets and its intriguing houses. The streets go down from the castle taking the path of the river and locals have learned to take advantage of the cliff that the river forms on the rock to build houses. This type of housing is known as “abrigo bajo rocas” (rock shelters) and in contrast to other Andalusian constructions (for instance the caves in el Sacromonte de El Albayzín) it is not carved into the rock, instead the walls are enclosed by the rock and then made into houses. Quite an impressive and ingenious way to get close to nature.

Apart from the natural beauty of the town, without a doubt the most prominent building is the castle. It was built in the 12-13th century and it was taken over by both the Spanish Moors and the 1484 conquerors. The only part that is preserved is the Homage Tower and one well, but by visiting it you can have an idea of what life was like back then and imagine vividly the castle’s magnificence. In fact, it played a vital role in defending Setenil, seeing as it took 7 failed attempts to seize the town.

Setenil de las Bodegas also stands out because of its church (Our Lady of the Incarnation Church) and its chapels (Our Lady of Carmen Chapel, Saint Benedict’s Chapel and Our Lady of the Conception Chapel). Of course the caves and bridges, because of the town’s mountain slopes, are well worth seeing while enjoying a stroll around the streets and they add to the ambiance of the town. There are also the Saint Roman Caves and Triana Street, Villa Street and Ronda Street bridges (built around 15th-16th Century)’ It is worth mentioning that Setenil belonged to the city of Ronda until 1630.

Setenil de las Bodegas is a town renowned for its celebrations, with Holy Week being the high point in the year. It’s been declared a National Tourist Attraction in Andalusia and is strongly ingrained in the town’s culture and traditions. This is where the well-known “Gang War” festivity between the brotherhoods of Our Father Jesus (in black) and Saint Vera Cruz (in white) originated. These two brotherhoods were originally one brotherhood, but with no clear reason why, they split into two brotherhoods around the 18-19th Century. Since then the rivalry is so strong that during the celebrations the town is split into two colors, both managing to attract gang members from as far as the UK and the US to demonstrate their team’s superiority over the other.

I’m sure when you see the photos you will understand the difficulty and beauty of these processions during Holy Week in Setenil de las Bodegas, wandering and snaking through narrow streets, avoiding hills and negotiating rocks as they carry the floats through the town. In some sections, temporary expansion of the streets is necessary, with some of the people holding the throne letting go of it or removing poles.

Another important date is the Saint Isidro Pilgrimage celebrated in May which unites all families in the town. The town fair, in August, consists of, like the fun fair in my dear Málaga, a daytime fair at Cuevas del Sol Street and the night time fair at the fairground. September 20th celebrates the patron saints, Saint Sebastian and the Virgin of Carmen.

Where to eat in Setenil de las Bodegas?

The most traditional Setenil de las Bodegas dish is Sopas Cortijeras, which is made with bread, olive oil, asparagus and poached egg. As well as this dish, you should try migas (fried breadcrumbs eaten with various accompaniments), goat’s cheese, potatoes with honey, fried cider dumplings, rabbit a la serrana (a sauce with pine nuts, raisins, white wine, thyme and rosemary), cactus leaf salad and cured meats, among many other dishes.

We were lucky to stumble upon a hotel just 15 minutes walking distance from the town center. It’s called Hotel El Almendral, offering a relaxing stay in the middle of nature (we didn’t stay for the night in Setenil de las Bodegas). It also has a restaurant serving traditional cuisine. In the restaurant, they treated us like we were royalty, and as soon as we entered, we had splendid service. We were made to feel comfortable and the waiting staff recommended the best dishes for us. Everyone was relaxed, which made you feel at home.

As per usual, we decided to share everything and we tried a fair amount of the cuisine on the menu. We began with a salad of Serrano Ham and mushrooms in a Pil-Pil vinaigrette that was really delicious. We followed that with a dish of potatoes with Ibérico chorizo from the Sentenil mountains and a soup with slivers of ham and a touch of mint which now I’ve remembered how delightful it was, just writing about it makes me cry actual tears, it was that good. Those were the starters. Then we ordered a dish each for ourselves which we also shared. We opted for the pork fillet with an Alberite reduction, a sweet red 2009 wine and an onion jam – the combination of flavors were phenomenal – and the hake stuffed with beans and salted wheat with garlic cloves and a piquillo pepper jelly combined the freshness of the fish with the salty hint of the garlic cloves and peppers. To finish off, with already filled-to-the-brim stomachs, we tried the peach mousse on a bed of peaches in a subtle cinnamon syrup. In the town, there are also many highly recommended places to eat, which we’re sure the locals will give recommendations. And if like us, you decide to eat at the hotel that we’ve recommended above, you can always pass by to have a coffee in one of the many cave bars. It’s amazing sitting down and looking at the rocks above your head while people come to the bar to meet up, chat or play.

Setenil de las Bodegas is a marvellous town that is a great day trip, being close to the city of Cádiz and near to many other lovely towns such as Vejer de la Frontera and others in the Málaga area. Because of its distinctiveness, its beauty and the feelings it evokes when you wander through its streets, we ruskomend Setenil de las Bodgegas with 5 boquerones. We’re sure that in one way or another it will surprise you and it certainly won’t leave you uninterested. **We were invited to eat at Hotel El Almendral by The Cadiz Tourism Office. In no way were we swayed to write a positive review. As always, all opinions are our own. 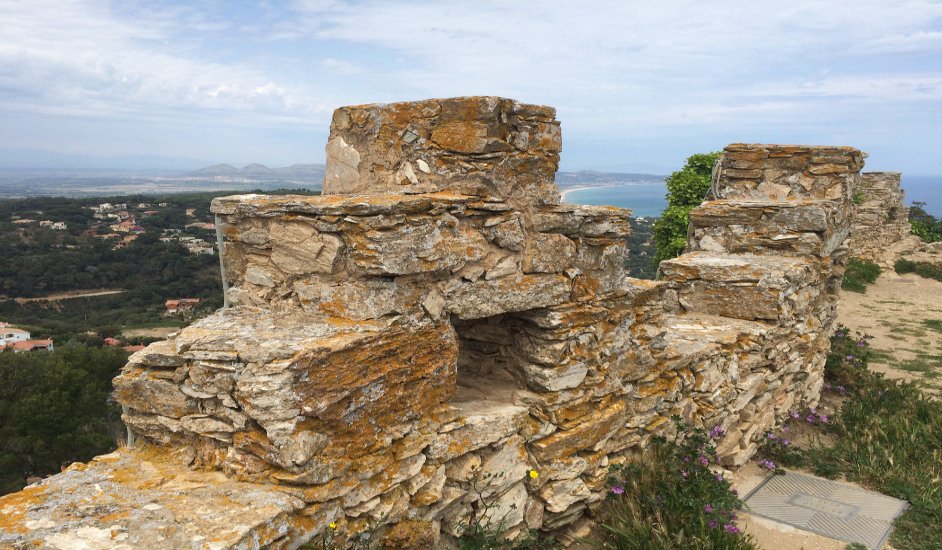 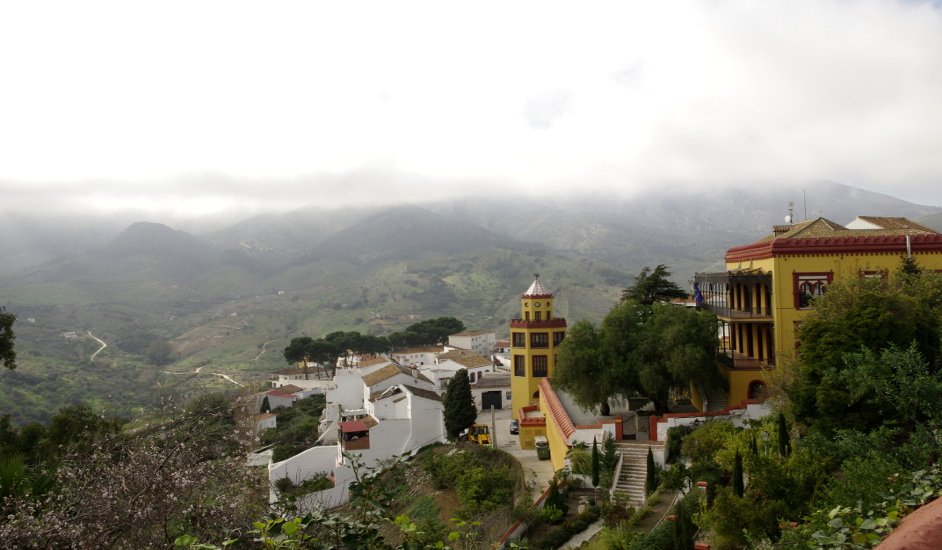