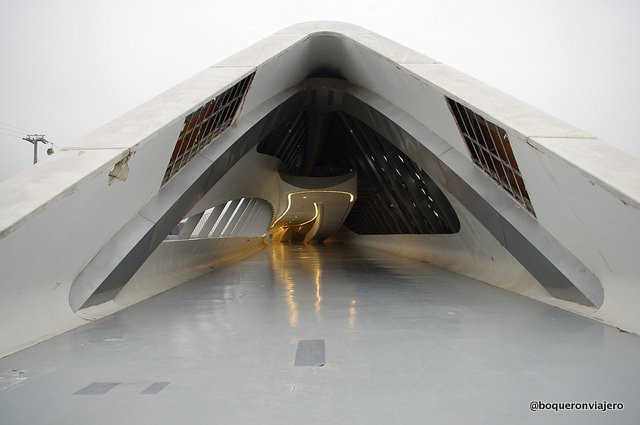 The Zaragoza Expo helped reclaim the water.  Today it is a beautiful area where you can walk in between the futurist sculptures

I have to admit that when I began this article, I thought I would tell you all about the architecture and interesting buildings that are left over from the 2008 Expo in Zaragoza; but it is also true that halfway through writing it, I felt like I was composing an article for Wikipedia instead of El Boqueron Viajero.  So I have decided to change course, and tell you my version of what we saw at the grounds of the Zaragoza Expo area.  For the architecture and the details…don´t worry, you can find more than enough information from the omnipresent virtual “amigo” Wikipedia.  But I hope you will continue reading this because you have the spirit of Rusko, and the Boquerón Viajero. In 1957, Tennessee Williams wrote in Orpheus Descending, “The future is called ´perhaps´, which is the only possible thing to call the future.  And the only important thing is not to allow that to scare you.”  This is the feeling I got with the huge buildings constructed for the Zaragoza Expo in 2008.  They are, in themselves, futuristic and modern, both in shape and in design.  There was a bridge pavilion that was both useful in that it allowed you to cross the River Ebro, as well as interesting in its 4 exhibition spaces, and futuristic curves.  We first saw the bridge from afar, and with childlike curiosity scrambled down the hillside to see it from below, right next to the river.  We skipped along the meditation path and took photos from strange angles on the grey autumn afternoon.  It was a story waiting to happen.  It was a perhaps that wasn´t.  How busy this park must have been during the Expo!  How full of children, full of life, and full of tourists…yet on this day, the area was almost eerie, the air pregnant with the voices that once existed.

Halfway across the bridge I caught sight of a huge sculpture.  It was a white head made out of letters that rose high into the air.  And, as we were hoping to visit the Expo grounds quickly and still make our train, I began to run towards it.  I think, sometimes…the child in you, as Fred Rodgers wisely put it, “is sometimes still…and sometimes not so still.”  Those times that we let our inner child guide us, disregarding who might be watching…those are the times that we truly feel free.  Here, in this abandoned bridge to the forgotten future, I began to run towards a sculpture ignored by the teenagers skateboarding nearby.  When I arrived I realized that you could walk inside this huge head full of letters.  And it´s true that I have never been able to resist interacting with sculptures, especially in outdoor spaces! Nearby were other works of outdoor art- one composed of boxes that had quotes about protecting the world´s water supply, as the theme of the Expo 2008 was water.  In fact, its mascot was a strange looking drop of water called Fluvia. This was a playground for those who like to take photographs, or let their imagination run wild, as the buildings themselves have such a futuristic touch that you might think yourself to be in a new land.  The depressing undertone, even more evident on that grey day, is that these buildings are not located in some new era in the year 2090, but rather that they were built years ago, and have been allowed to remain as little monuments to an excitement that was short lived.

It all begs the question: At what point do we stop running across the futuristic bridge with wild child-like abandon?  When do we stop imagining structures that are painted in rainbow colors, or have curves like the latest space shuttle?  I hope never…and Rusko would have to agree. 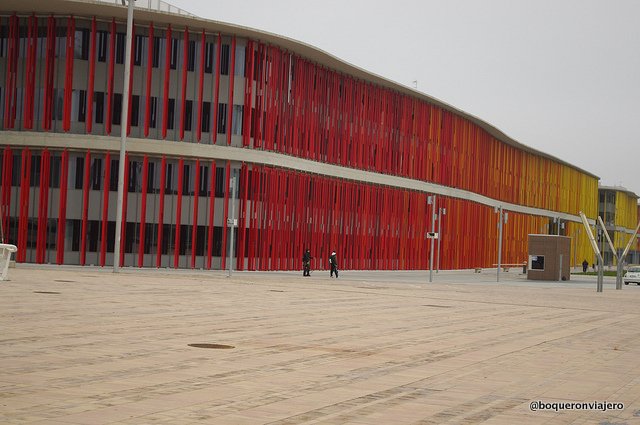 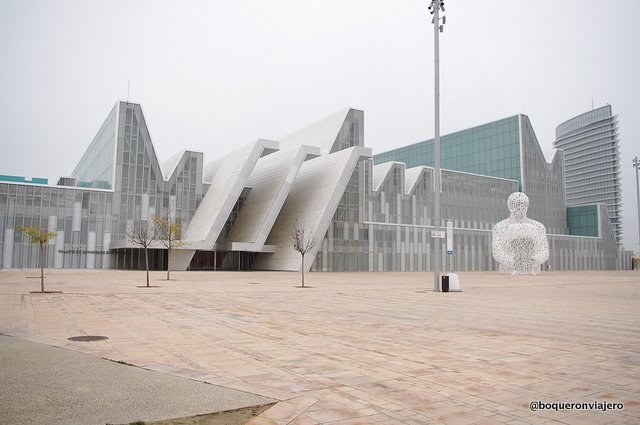 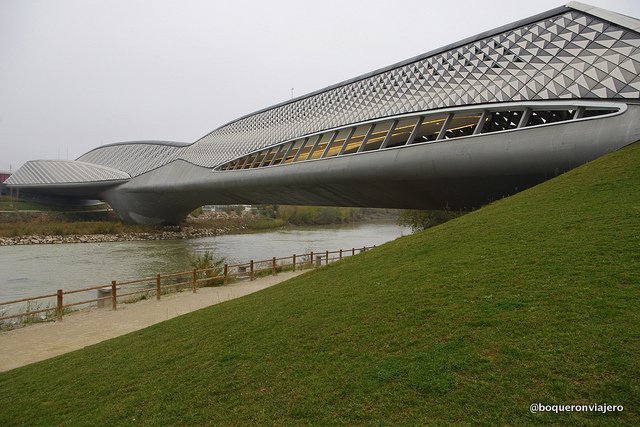 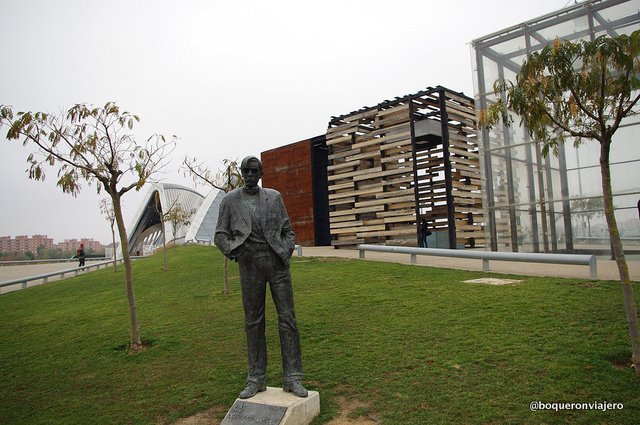