Walking through Lastres, the town from Doctor Mateo, with some beautiful sights to see

Our first route across the Asturian coasts arrives in the Council of Colunga. Here, in the village of Lastres, the Spanish television series, “Doctor Mateo” is filmed (It is similar to the American series “Northern Exposure”. Our visit to Lastres coincided with the town´s yearly celebrations, so with it being the summer and because now it is in fashion; the number of tourists was high. Despite that, Lastres was, possibly, one of the villages which we liked most.

The first time that we went to Lastres was the second day for dinner. We wanted to do it in a restaurant with great views; where you are able to see the coast, the village and, that night, the fireworks. The first anecdote was while we were parking and we crossed the old city. Sincerely, we thought that we were not to get out, because the streets were very narrow and to go in reverse was impossible. Finally, we got it with the help of one of the local people.

In the restaurant we knew that without a reservation it was impossible to be seated. The rest of the restaurants we visited did not convince us with the food or the price. Finally, we decided to eat dinner in Colunga and to come back the following morning. On our third day, we went to visit Lastres again. The choice was positive, because the number of tourists was less and the views were better. The first part that we visited was the port and the beach. Some natural stairs allowed us to go down to the sand and access a small beach like a cove.

The port allowed us some impressive views, but you must go up to an upper gangway that is forbidden. Despite the fact that it was prohibited, we thought that we could not leave Lastres without going up, so we asked and they let us. From up there, the views were very beautiful and we could see the Cantabrian Sea, the village in the mountain and the beaches of Lastres. Without a doubt, going up is worth it, but ask first, of course. Also, in the port you can see the fishing tradition of the village first hand.

On the other hand, the village of Lastres is on the upper side, where you can go up walking or like us, parking the car at the highest point and to starting from there. Although Lastres is a small town, it conserves the tradition and the history in the streets (in some of the places, you will be able to see the importance of the business that the town of Lastres has become). Also, there is a route where you will be able to see the places of the series Doctor Mateo.

In Lastres, we walked around the streets and we visited two main monuments. The first is the Church of Sainte Maria of Sabada, declared a cultural place of interest and with a baroque and neoclassical style. We also saw the Chapel of San Roque located in the highest part of the village. From these places, we could see amazing views that we are going to remember always. It is a way to loose ourselves in the infinity of the Cantabrian Sea.

If you look to the side, you will see the figure of a dinosaur in the forest. Although we wished that it were real, it belonged to the Jurassic Museum of Asturias (which we will review in another article). In general, despite the touristy aspect of the village losing its authenticity, the visit was worth it because it is gorgeous. We ruskommend the village of Lastres with 5 boquerones.

Travel to Oviedo : A route around the city 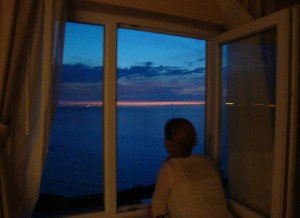 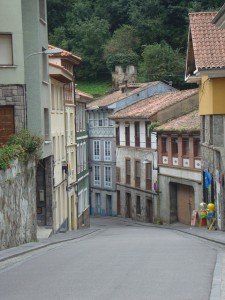