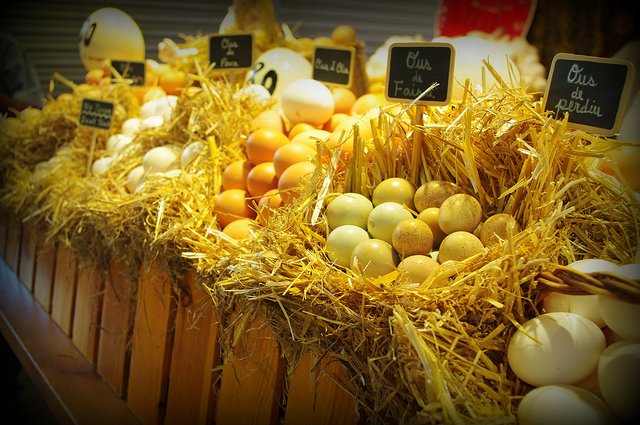 La Boqueria is an historic marketplace that’s worth a visit, despite the crowds 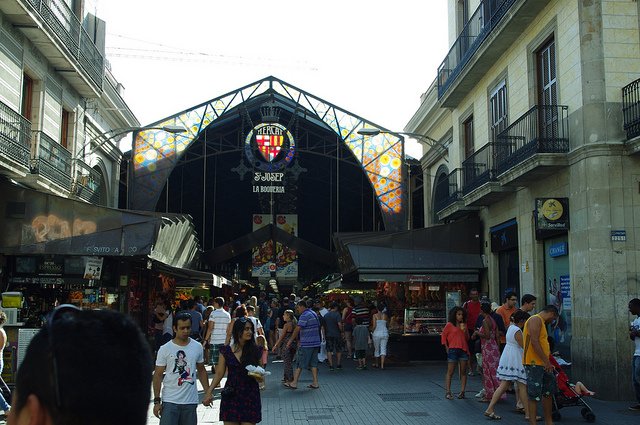 I have often spoken of my love of marketplaces in El Boqueron Viajero. Ever since the ancient Greeks the “agora” has been THE place to be, and if there is nothing I like better its observing the local people doing their thing, communicating, and interacting on their own terms. This is the stuff of life, the day to day that makes travelling more than a way to collect little spoons or pins, or plates from around the world. Here, in the market, you get to see what daily life is all about. The men and women arguing over the best price for fish in the Mercado del Carmen in Málaga, savvy collectors trying to find the best price for an antique in El Rastro in Madrid, or farmers who brought their fresh corn to Main Street in the West Reading Farmer´s Market. It is humanity come together to negotiate, interact, and exist together. 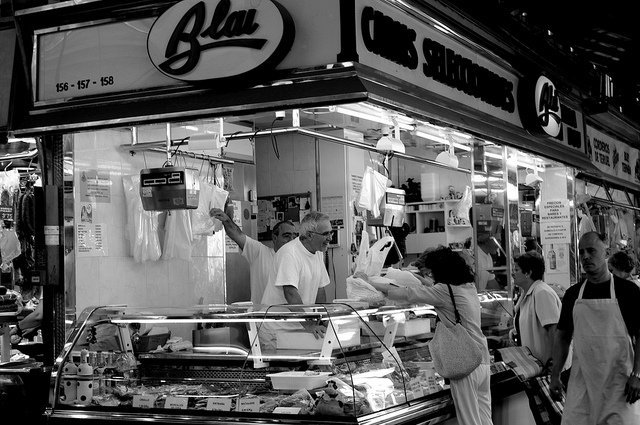 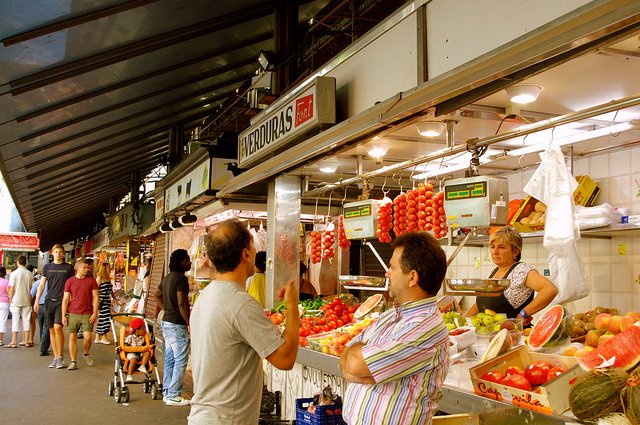 When I entered La Boqueria in Barcelona, I had heard a lot about this gigantic marketplace, but what everyone failed to mention was that the environment had become less natural thanks to tourism and hence had lost some of its everyday charm. I was disappointed to find that the whole atmosphere was more of a fairgrounds than a traditional marketplace. I like to think that after living in Spain for several years, and being able to speak fluent Spanish should qualify me for a step up, so when people shout “you want to try” in English it takes a bit of the charm out of the place for me. 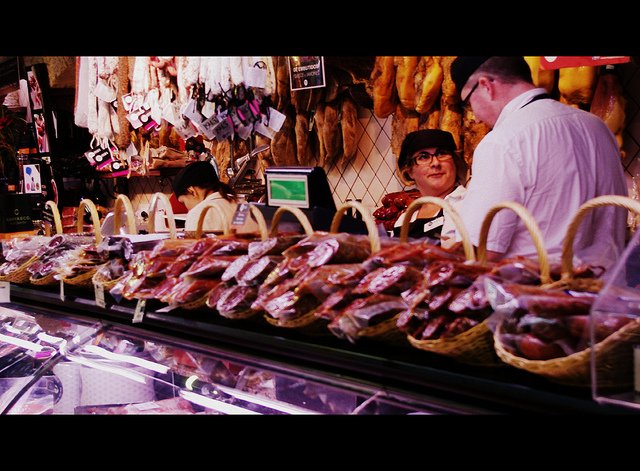 This marketplace has been around since 1836 when it opened its doors just outside the old city limits with lots of travelling vendors selling their wares. The market´s real name is Mercat de SantJosep (Saint Joseph´s Market) due to the fact that it is located where the old Convent of Saint Joseph (San José) used to be in the 16th century. After the convent was torn down, the city of Barcelona created a huge porch with big pillars at the entrance of the city and the market found a permanent home. It´s interesting to note that they made a conscious decision to put the market just outside the city in order to avoid high city taxes on the goods traded there. 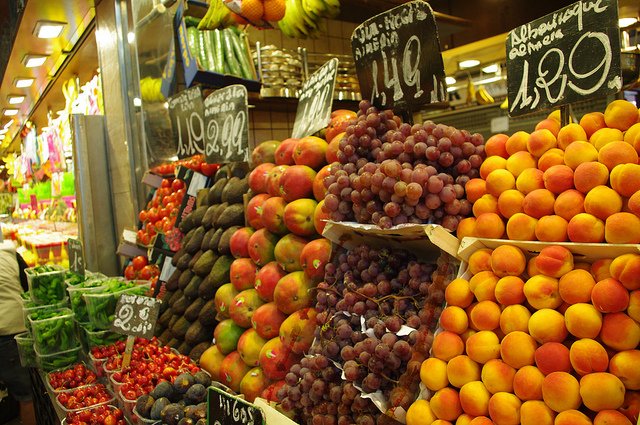 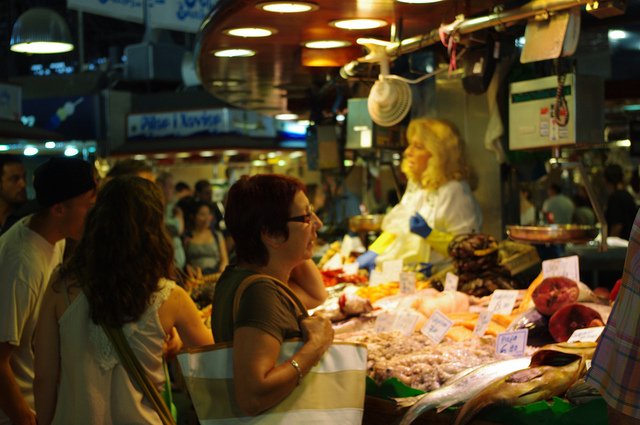 Today the market is popularly known as “La Boqueria” because of its location on the Plà de la Boqueria and is one of the largest municipal markets in Catalonia at 2583m2, with more than 300 stands offering all kinds of local and exotic products, as well as tapas stands and places to try out the fresh foods being sold. Due to its history and variety of products, the market is also the most visited by tourists. 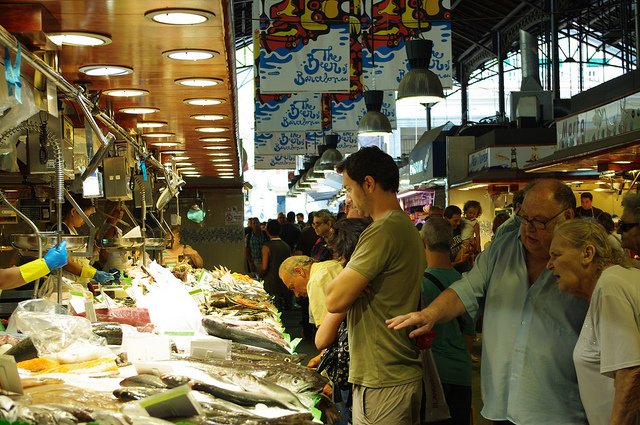 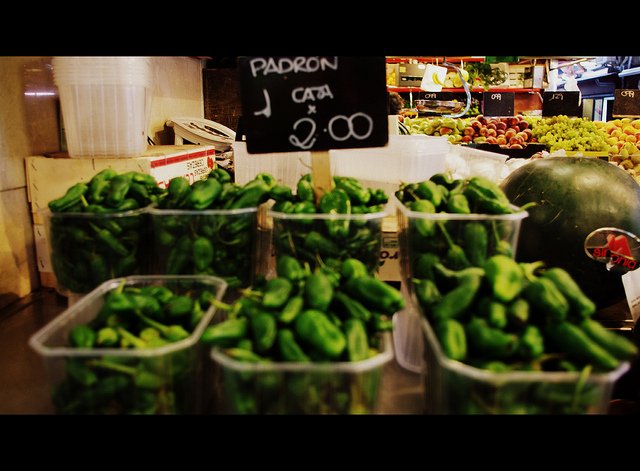 We visited La Boqueria to get a feel for what this famous market might be like, and tried a few tapas at a place called “El Quim de la Boqueria.” El Quim was a tapas bar located right in the middle of La Boqueria market where you had to wait in line to get a stool around the bar. Once there, the waiters (four or five of them) rushed around behind the small counter to bring you delicious pieces of Spanish omlette with zucchini or eggplant, codfish croquettes, or seafood. We were careful when we ordered, as the prices for fish seemed rather expensive, so we stuck to the more traditional tapas. Everything we tried was delicious, but we ruskommend you take a look at the prices before ordering just to be on the safe side and avoid an unpleasant surprise. 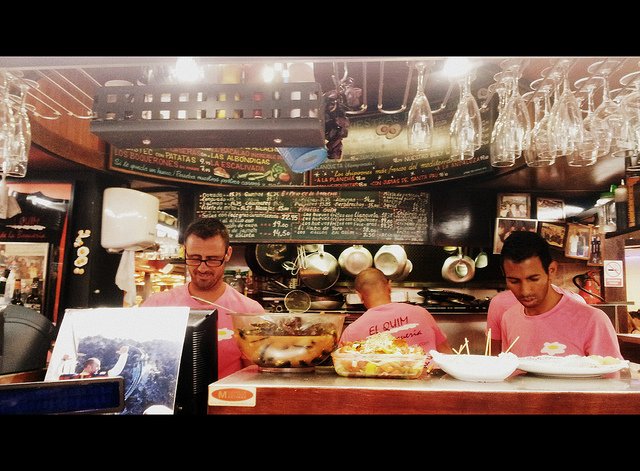 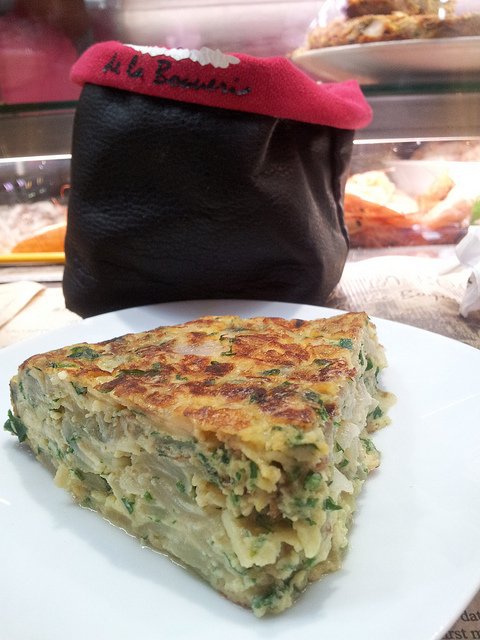 Overall, the environment of La Boqueria market is hectic, full of colors, sounds and smellsthat are more than authentic. The only thing you have to be careful of is that some of the stands try to trick visitors offering products that aren´t exactly what they say. For example, we found several that were selling fresh fruit juice but it was really watered down. Despite all that, it is indeed a historic marketplace, and that alone merits your visit. The tapas and experience of eating inside the market is also ruskommended as long as you keep your eyes open for prices that seem too high. If you do go to El Quim, make sure to try the tortilla de calabacín y cebolla (onion and squash omlette) and the croquetas de bacalao (codfish croquettes). We ruskommend La Boqueria with 4 boquerones. 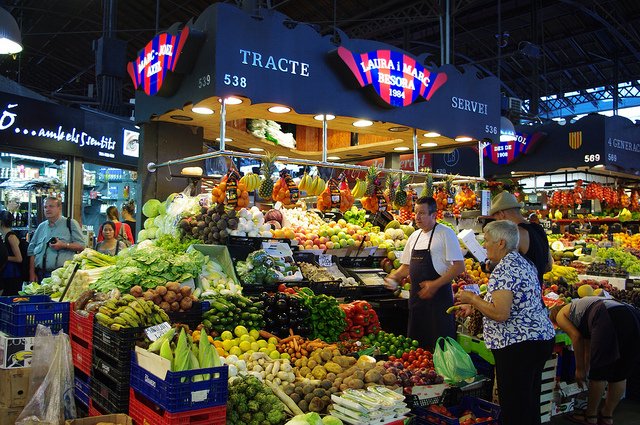