Have you ever wondered about our ancestors? This was our experience with our “relatives” from millions of years ago at Atapuerca near Burgos.

Burgos is well known for two things: the Cathedral and blood pudding (aka morcilla). What many people don’t know, however is that Burgos is also home to one of the most important archeological dig sites for human evolution in all of Europe. In the nearby caves of Atapuerca archeologists have discovered remains of pre-neanderthals dating back 1.4 million years. It’s a fascinating field that stretches beyond history to the very core of what it means to be human and ways that we innately interact with our world. So, when we were invited along on a guided tour of the Atapuerca archaeological site, the CAREX and the Museum of Human Evolution we jumped at the chance. 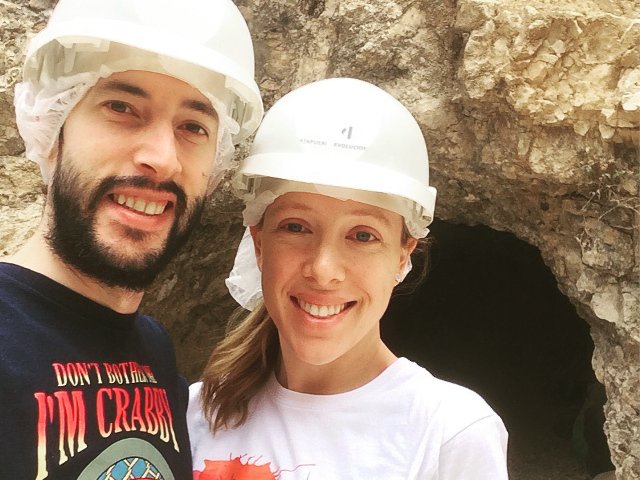 Our day started out a little before noon at the Museum of Human Evolution in the center of Burgos. The building is actually huge, so we walked all around the perimeter (well, at least three quarters of the way) before finding the main entrance. When we arrived, we were told that the guide would meet us in the corner under a sign that said “Lanzadera Atapuerca” at 11:45am. We had about 10 minutes to use the bathroom and browse the exhibit downstairs. 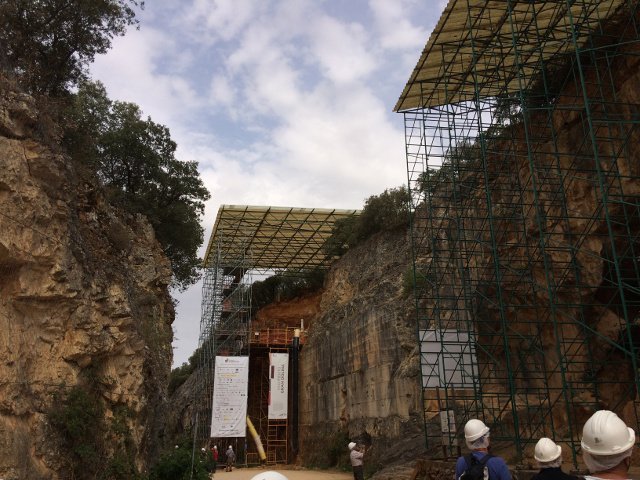 When the guide arrived, she enthusiastically explained that the bus would take us first to the archaeological site at Atapuerca, then there would be a break for lunch at a nearby town and finally we would visit the CAREX, which is an educational center (Centro de Arqueología Experimental). We’d arrive back at the museum around 6pm which gave us two hours to explore the exhibits. I’m not going to lie here; it sounded like a full day and I wasn’t sure I was interested enough in archaeology to be engaged for that long. (Spoiler alert: We closed down the museum – it was THAT amazing!) 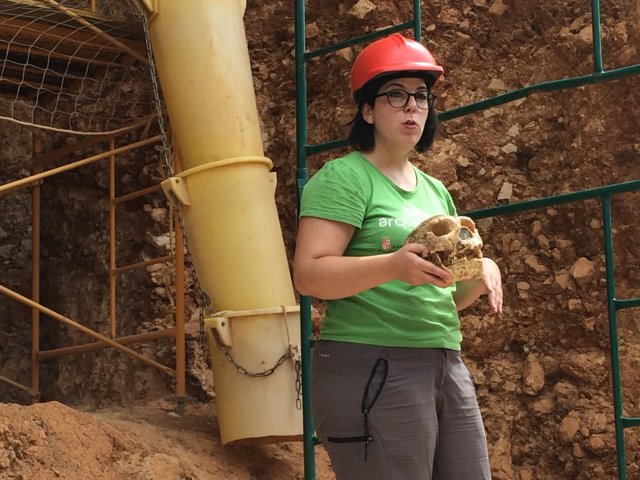 We were part of a group of about 30 people and we all made our way to the bus with our guide, Ángela, who was herself, a member of the dig team at the Atapuerca site. She explained to us on the bus that there were several restaurants where we could make a reservation for lunch (or if we chose, we could have a picnic and buy a sandwich at a little bread shop in town.) Pedro and I decided it would be nicer to have a picnic, so we settled back to watch the scenery as we sped out of Burgos through the countryside. Within 15 minutes we had reached the archaeological site of Atapuerca and we all piled off the bus. 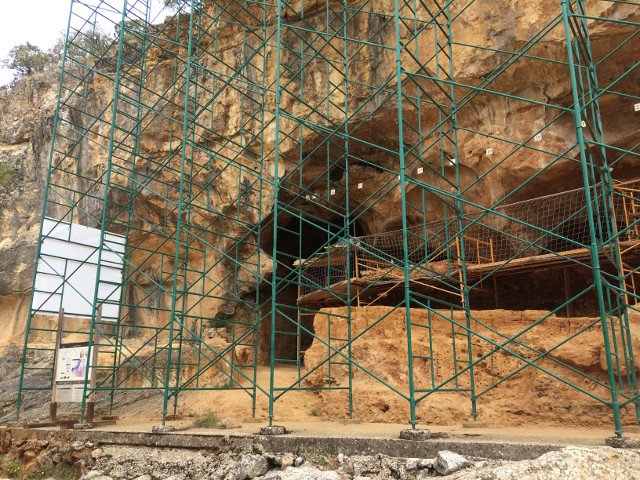 Ángela told us that we would all need to don a protective construction helmet and a hairnet to protect us from scary germs. I’m all for protecting myself from “scary germs,” so we “suited up” and followed her down the road made by a proposed railroad project from 1895. As the story goes, an Englishman named Richard Preece planned his railway project through this area in the mountains to take advantage of the valuable rocks to sell. What he didn’t realize was that underneath all those rocks was one of the most important archaeological sites in Europe. It’s now called the “Railway Trench” and within one kilometer there are three sites: the Sima del Elefante, the Galería and the Gran Dolina. Ángela took us on a walk and explained what they have learned at each site. 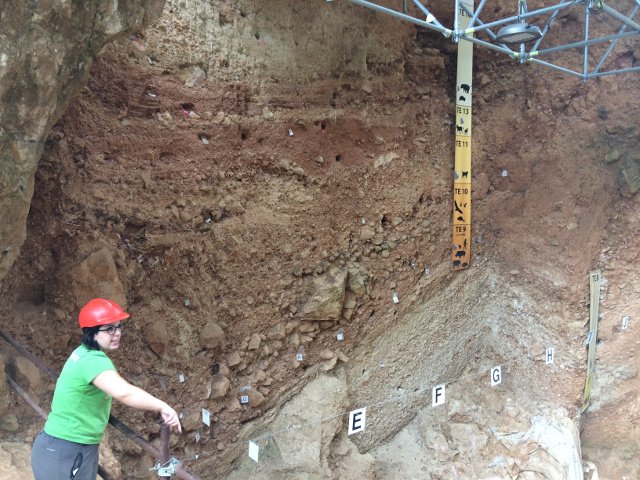 The thing I was most intrigued by was how they already had evidence that there was community back then. There was one skull that they found of a man that they call “Miguelón.” He apparently had a really bad tooth problem and it got infected to the point that it pushed the bone out around his affected tooth. They assume he eventually died from the infection through blood poisoning; but if his tooth was that bad, there was no way he was going to be able to survive the seven months this modification would have taken without eating. At the time the food was all stuff you had to really chew (raw meat, nuts, etc) so the only way this could have happened was through the help of the tribe – they must have done like the birds do with their babies, chewing up the food and giving it to him as a kind of “porridge”. It sounds a bit gross; but the concept of community that long ago is impressive. 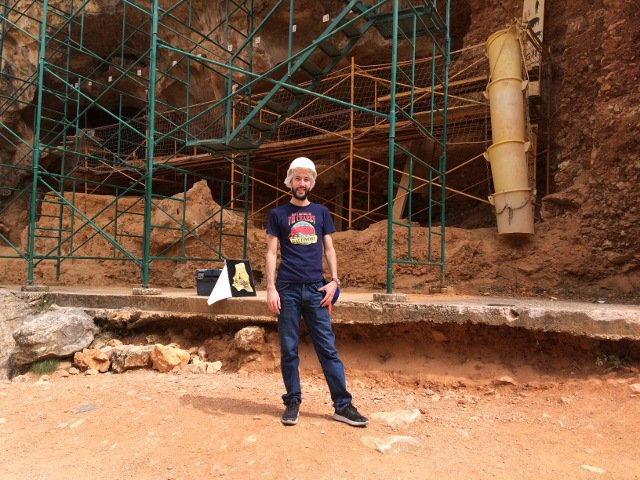 There were other skeletons too that proved the community theory. For example there was a little girl who was born with the plates in her skull fused together (apparently this can still happen but they do an operation to fix it). In this case, it meant she died at age eight. In another case there was an old man who must have been at least 60 (ancient in those days) who obviously wouldn’t have been able to kill or pull his weight in the tribe.

They also had a system where there was a cave where they kind of trapped big animals (think horses – although there were rhinoceri living in the area at that time!) The hunters would go in, use a knife made out of stones that they broke off to get a blade and basically cut off the limbs and carry them out before some mountain lion or other animal could come and get it first. The guide said, this was essentially the world’s first “grocery store.” Haha! I would DEFINITELY not be suited to be a pre-neanderthal woman!!! I can’t imagine fighting for my food with a mountain lion or some other beast! 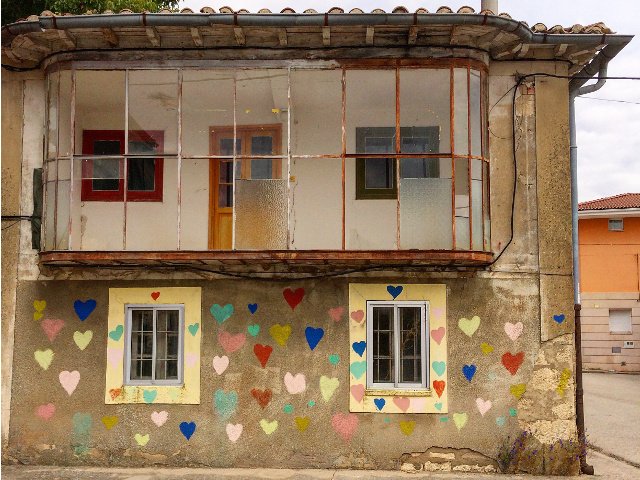 When we had finished the visit to the “Railway Trench” the bus dropped us off in the tiny village of Juarros. When I say this is a small town, I mean that it is one of those places that you drive through and in five seconds you’ve come out the other side. Pedro and I bought a sandwich and ate it in a little park nearby. We spent the rest of the time wandering around and exploring a bit. Turns out that this is an area where they come to “wash off” some of the artifacts found in the digs during the summer. My favorite random little find on this lunch break was a house painted with multicolored hearts seemingly for no reason at all. 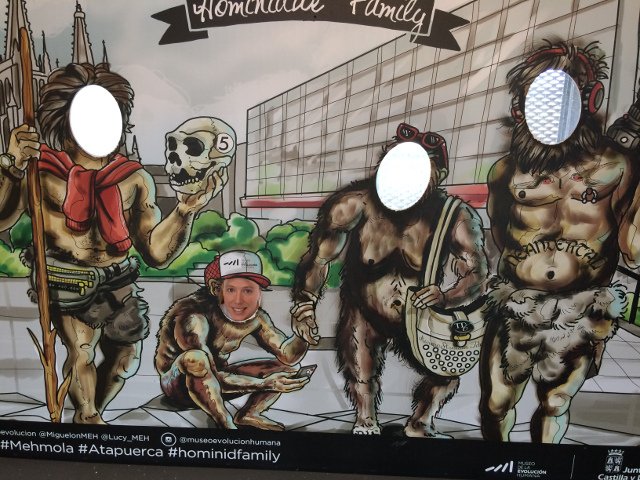 In the afternoon the bus picked us up and we continued on to the CAREX educational center. Here Ángela explained about how they made the different tools back in pre-neanderthal times and she even showed us how to start a fire from scratch. It was quite impressive; and it helped us have a bit of context for when we went back to the museum. 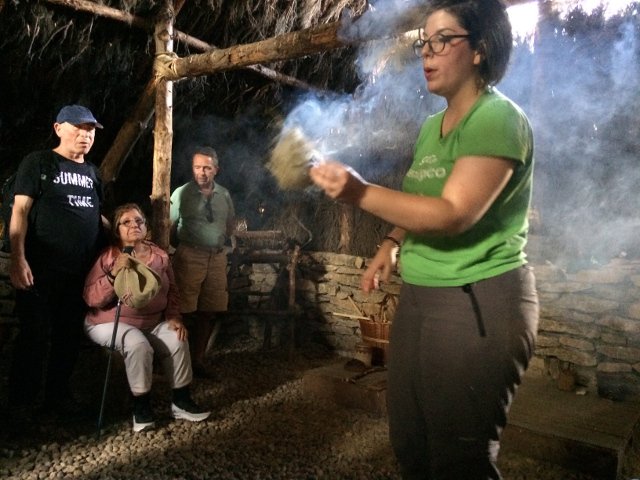 Back at the Museum in Burgos we met up with a different guide who would give us a guided tour of the actual museum. Just like Ángela, she participated in the digs and while we were tired from our day out in the sun; she was so passionate about the subject of archaeology and the site at Atapuerca that it was infectious. We spent about two hours with her and it flew by. 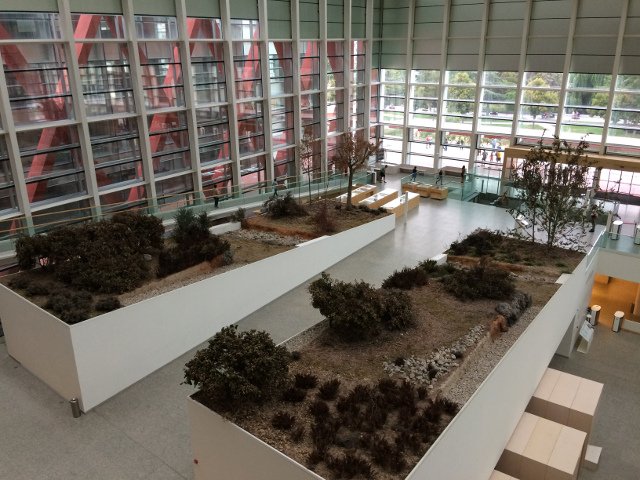 The lower level of the enormous building is dedicated to the remains found at the caves of Atapuerca. We saw the actual remains that Ángela had taught us about that morning along with other artifacts, tools and animal remains from the site. It was absolutely amazing to see these artifacts up close and really appreciate what it must have been like to come upon them for the first time. As we moved up to the next level of the museum there was a fascinating exhibit of the evolution of man with life sized sculptures to model just how each of these steps came to be. 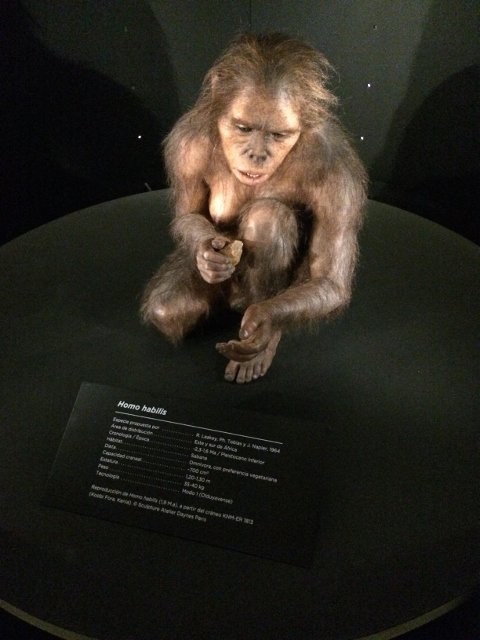 We asked a lot of questions and our guide was happy to answer them, eyes bright and quick to direct us to any visual aides that might help us to understand and puzzle together the history in a way that made sense to us. We ran through the next levels of the museum since we had very little time left. There were hands on exhibits and artistic renderings of various aspects of evolution. On one of the floors, we walked through one artist’s version of what the human brain is like on the inside. It was a maze of wires and bright lights flashing on and off. While perhaps not the most accurate; it was definitely an intriguing mass in the center of the museum floor. 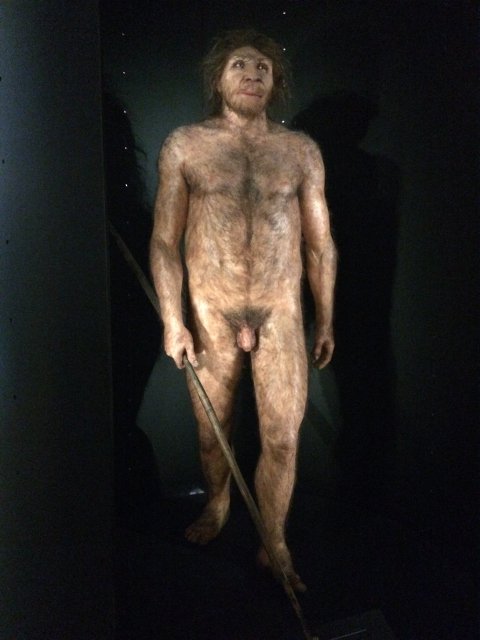 As I said before, we closed down the museum for a grand total of almost eight hours spent learning about human evolution and our long lost ancestors. My takeaway? We aren’t so different from those ancestors, and how incredible it is that we have continued to survive all these millions of years. (That and the fact that Pedro, and all Europeans, are very likely to have a bit of Neanderthal blood in them…although we’d have to do a genetic test to find out how much). Haha! We ruskommend a visit to the Museo de la Evolución Humana and the Atapuerca archaeological site with a golden boqueron, as this was one of the most interesting days we’ve spent in a long time! Well worth the time and the VERY reasonable price in addition to absolutely stellar guides! This is a can’t miss visit if you find yourself in Burgos. 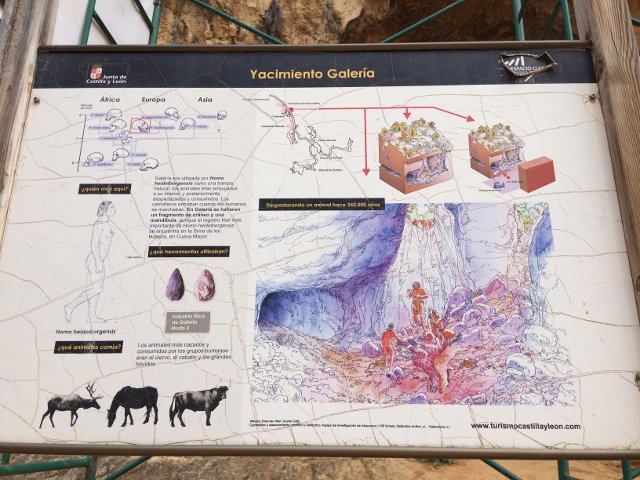 A Weekend in Avila, a whirlwind trip to the walled city 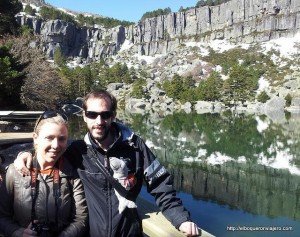 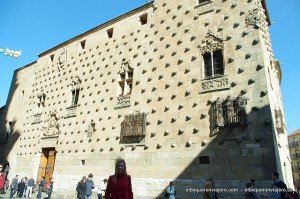 Salamanca : The beauty of a historical city