Recently, Pedro and I were watching a Netflix documentary about the Minimalists. They were talking about how people go around collecting things, objects, belongings and many of them don’t really bring them joy or serve a purpose. The idea was that you should make an effort to rid yourself of all the extra junk that isn’t either “bringing you joy” or “serving a real purpose” in your life. However, it made us start to think about travel in terms of being a minimalist and what that would look like. In short, I think it would be slow travel. The world tells us that we have to see certain monuments and take our photos next to them or we haven’t really been to a destination. Is that true? I doubt it. We often talk about going off the beaten path in our travels and trying to get to know a bit of the local flavor outside of the tourist guidebooks. Now an internet based tour company called LocalGuddy is helping to promote just that. 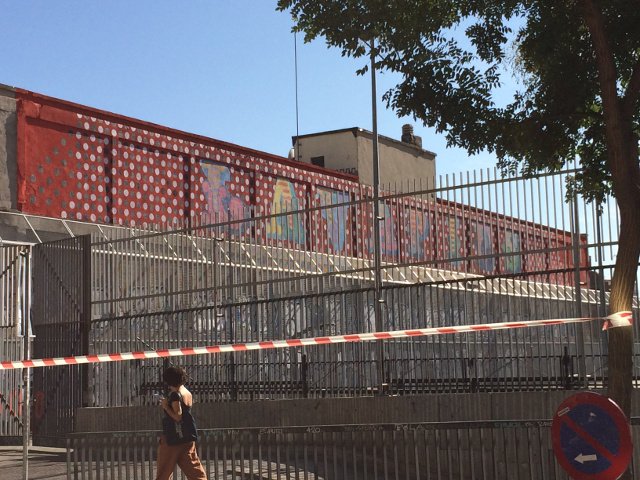 Local Guddy links up travelers and locals so that they can have unique experiences. They operate out of 200 different cities and there are over 700 tours to choose from. When Local Guddy approached us to try out one of the tours and share our experience here on the blog, we were more than happy to take them up on the offer and looked at the tours offered in Madrid. There were options for every interest ranging from a visit to a bullfight ranch to paella and sangria cooking classes or a vegan cuisine tour. In the end, however, we chose to take a tour of the neighborhood of Lavapíes to “discover Madrid’s underground street art style.” 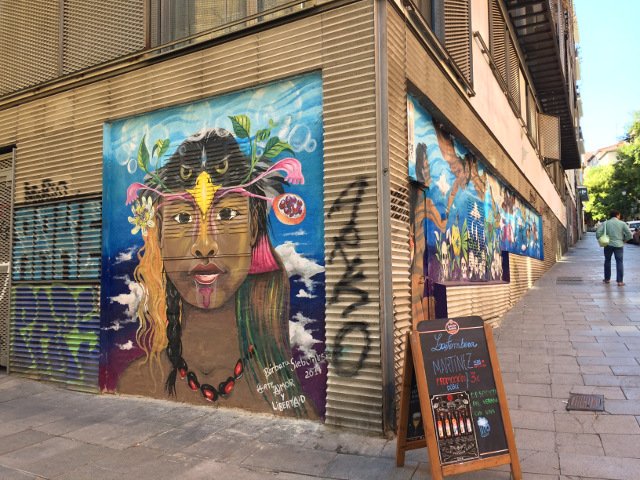 We signed up for the tour via the website, although the guide emails you personally to confirm since there is a minimum of participants (at least 2 people) in order for the tour to take place. The cost was only 23 euros and the tour lasts between 2 to 3 hours, so it’s a good value for your money, especially considering that the groups are relatively small and the guides are local experts. In this case Javier is a street artist himself and knows some of the mural artists personally. It can’t get much more “insider” than that! 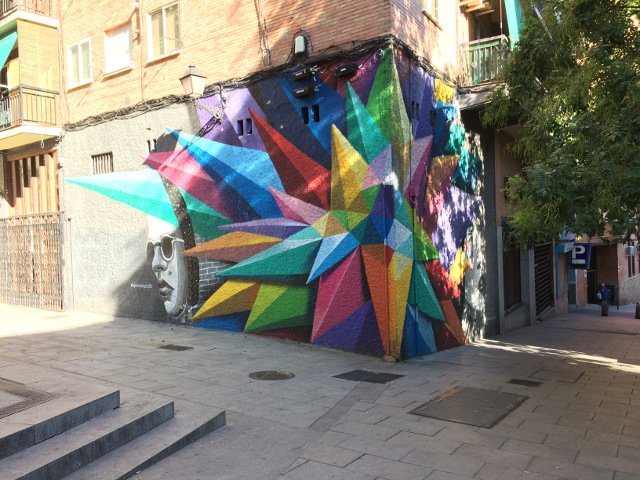 Javier met us at the Atocha train station and we found that the group included students from the University of South Carolina who were going to be starting their study abroad experience in a few weeks. The tour was available in French, Spanish or English and in this case it wound up being a mix of Spanish and English so that the students could practice, and everyone else on the tour spoke both languages, so it wasn’t a problem. 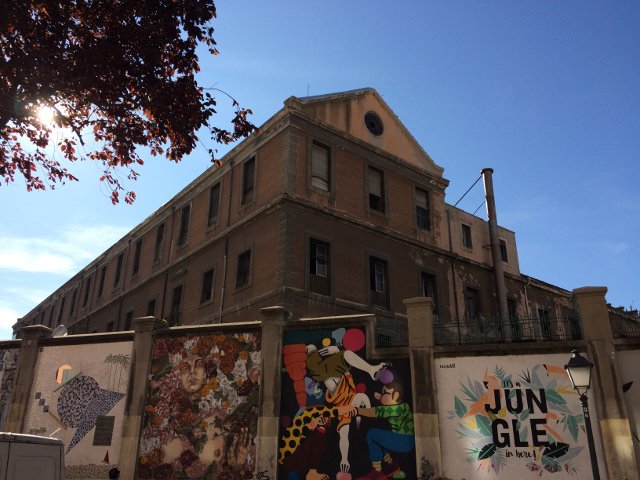 We walked through the streets of Lavapies stopping at important points so that Javier could explain about different artists or details. Highlights of the tour included the walls surrounding Madrid’s old Tobacco Factory (La Tabacalera). We had visited the building on a tour of Industrial Madrid, but at the time the artists were working hard inside the building. Now the whole wall surrounding the old factory is decorated with bright paintings by international artists. 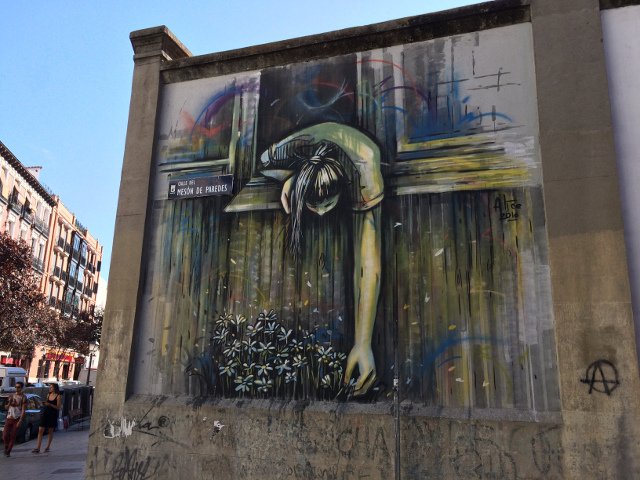 Another work that I loved was by the artist El Rey de la Ruina. It was a huge mural on the side of a building next to a soccer field with the feminist message “Libres, Socialmente Iguales, Totalmente, Humanamente Diferentes.” (Free, Socially Equal, Totally, Humanly Different.) Nearby was a stunning colorful star spanning the corner of a building by artist Okudart. He is considered by many to be one of the most important street artists in Spain, and I have to say that his work was some of my favorite on the tour. 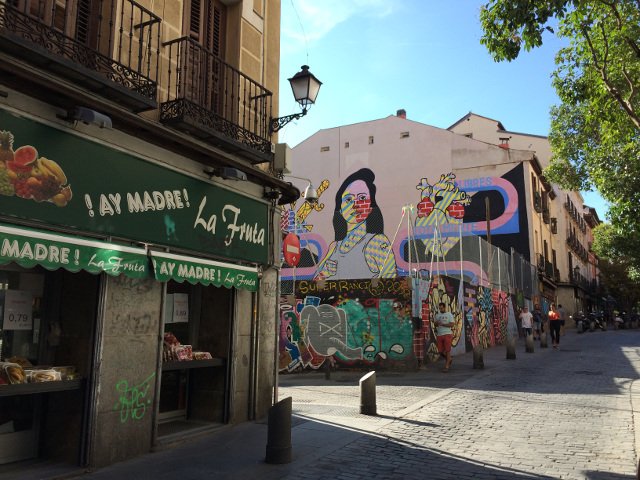 Another interesting stop was the community space called “Esta es una Plaza” where we saw a mural by an artist I had first heard about in Málaga. Roa is a Belgian street artist known for his black lines and crawling animals. In this case he painted several wild boars crawling over one another while in Málaga he painted several rats crawling up the side of a building. His work is just dark enough and realistic enough to make you stop and contemplate his common themes of life and death. In fact, in many of his murals you can see bones and organs emphasizing that theme. 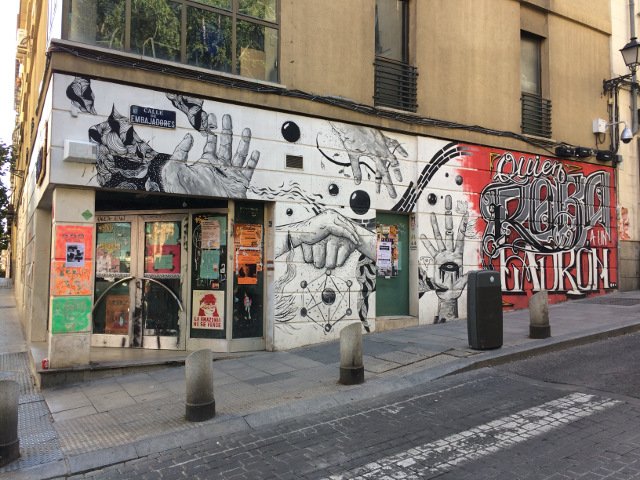 The tour wound up at the Mercado de la Cebada at metro stop La Latina. It was a wonderful tour that took us through a neighborhood not often visited by tourists. It’s an area of Madrid that, if you don’t live nearby you might not know very well (although we do recommend heading to Lavapíes for some great international cuisine!) All in all, we would definitely recommend the Madrid Street Art Tour and Local Guddy, as it was easy to book and a great value for the money! After all, what’s not to like about an enthusiastic local guide showing off his favorite corners of the city? Now the only question is where to explore next! 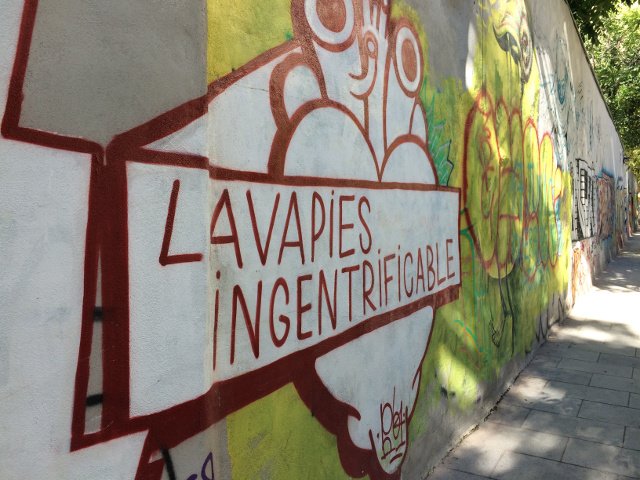 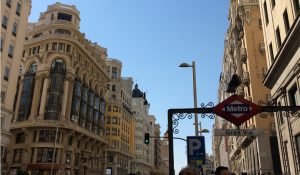 Our 5 Favorite Places to Meet With Friends in Madrid

Eric Vökel Madrid Suites, boutique style and comfort in the heart of Madrid 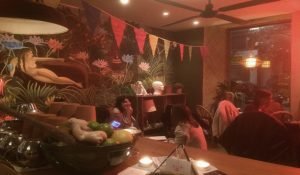