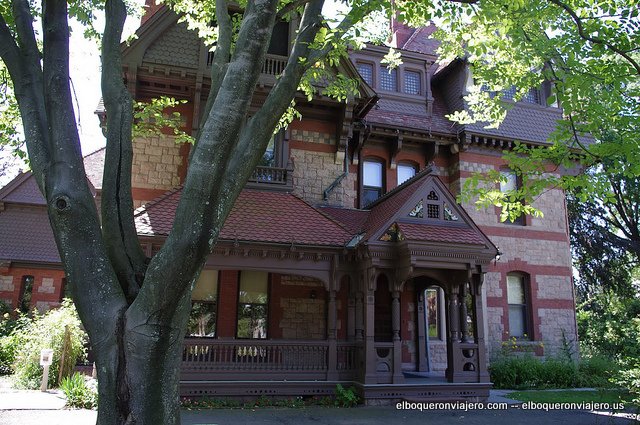 When we arrived at the visitor´s center, we signed up for a guided tour (9 dollars for an adult) and while we waited for the guide, there was a film about the history of the United States and how important Uncle Tom´s Cabin was in the fight against slavery. In fact, there is an anecdote about Harriet Beecher Stowe and Abraham Lincoln. Harriet, who stood only 4 feet 11 inches tall spoke with the then president and Mr. Lincoln said, “So you´re the little lady who wrote the book that started this great war.” He of course meant the civil war, which was fought, among other things, in order to end slavery in the United States. The book enjoyed great popularity with a variety of spin off merchandise including lamps, toys, musicals, plays, etc. Unfortunately, Harriet never saw the royalties from those spin offs. She continued to write and published over 20 other novels, although she is most famous for writing Uncle Tom´s Cabin (which has been translated into different languages and is famous the world over.) We began our tour walking through the garden. Harriet Beecher Stowe was an avid gardener. It was a common pastime in Victorian America and the garden was said to reflect the family´s style. The backyard holds a beautiful variety of flowers and plants, although after the high temperatures this July the majority of the plants were wilting or dead. I would recommend a visit in early May in order to enjoy the full splendor of the garden. We entered the grey house (originally painted a mustard yellow, although Harriet enjoyed the grey color) via a large front porch. As soon as we entered we were met with dark woods, rich jewel toned carpets and walls covered in various printed wall paper. The first room we saw was the sitting room which held Harriet´s desk where she was supposed to have written Uncle Tom´s Cabin. We also saw some examples of her paintings. Harriet enjoyed painting still lives of flowers and nature and displayed many of her works around her home. We continued into the parlour which housed a piano and had a bay window which let in sunlight from the back yard flower garden. On the windows you could see the ivy that climbed up and down the panes. It was a very tranquil place and the guide called our attention to the faint piano playing (sheet music that had belonged to Ms. Beecher Stowe). Upstairs we found the bedrooms. Harriet Beecher Stowe had twin daughters, Hattie (short for Harriet) and Eliza. The girls never married and lived with their mother helping her with travel, tours and sending her books to the publishers. The girls shared a bedroom with twin beds and an impossibly small wardrobe to keep their Victorian style dresses. On the dresser you could see the various silver articles used in the period. There was a large brush to clean the dirt off of their dresses, a big hook to undo all the buttons on their boots and their clothing, as well as well as several hat pins (a lady never went anywhere without a hat.) We also saw the large guest bedroom and Harriet´s personal desk. Her husband, who was a university professor and an author as well, had his office upstairs. Then we walked down to the lower level to find the large kitchen. It turns out the Harriet Beecher Stowe was a great supporter of the American house wife. She believed it was a noble profession and wrote books about how to run a more efficient kitchen. Some of her tips included using narrow shelves with no doors so that you did not run out and buy the same thing twice. Another big idea was to put the kitchen table in the middle of the room so as to save yourself a few steps. In fact, her advice is still being used today in Home Economics classrooms.

The tour ended with a visit to the Day House. This is a building next door to Harriet Beecher Stowe´s house and built in the Victorian style with a huge front porch and ornate woodwork. It is used today as the reference library and is open to the public for a monthy social justice themed lecture series, as well as available for small events. The downstairs hall was magnificent complete with an atrium full of flowers and plants, a huge sitting room with wood panels and lush carpeting. You could imagine yourself transported to the past. It really would be a gorgeous place for a small celebration or an intimate wedding! Rusko and I loved the Harriet Beecher Stowe center more than anything because we learned so much. Our tour guide was Cherie and she did a great job at explaining the important parts of the house. It made us realize just how important it was for someone like Harriet Beecher Stowe to voice her opinions. She was a strong willed woman ahead of her times. Her husband must have known she had the potential to change the course of history telling her, “Keep the Beecher family name. It´s an important family with many connections and you will be a literary woman.” We ruskommend a visit to Nook Farm (if you have time go to Mark Twain´s house as well!!!) with 5 boquerones.