If you ask anyone what to see in Cambridge, the first thing that comes to mind is Harvard and MIT. However this small city has a great atmosphere and energy, as well.

If you walk across the Longfellow Bridge from Boston with its padlocks and beautiful views of the River Charles, you will arrive in Cambridge, possibly one of the most well known areas thanks to its famous universities. While many people associate MIT (Massachusetts Institute of Technology) and Harvard University with Boston, they are really found in the nearby city of Cambridge, which is easily accessible by metro from Downtown Boston. We spent a night in Cambridge (at the Hotel Charles) and the area really surprised us with it’s charm, energy, quality of life and, of course, the atmosphere of a university town. You might be wondering how this city came to be known as Cambridge. In 1636, the New College (which would later become Harvard College in honor of John Harvard), was founded by the colonists in order to educate new ministers. The Newe Towne, later known as Cambridge, was the place chosen for the General University of Justice (for the Massachusetts legislature). Little by little the area became known for its academics and in May 1638, the name of the town was changed to Cambridge in honor of the famous University of Cambridge in England. This is why it is so important to differentiate between the English University and the name of this Massachusetts town with two of the most important universities in the world.

As you all know, Abby and I both love to visit historic and well known universities when we travel. As we walk through the grounds, we imagine the stories and people who have passed through, and we feel inspired to start new projects, and sometimes even think about going back to school to study and investigate. But as a computer engineer, and someone who loves learning about new technology, the Massachusetts Institute of Technology (MIT) has always been a point of referentce for me, and I’ve wanted to visit it for a long time. To give you a better idea, MIT has an acceptance rate of only 9% out of the more than 20,000 people who apply each year. Among its current and former professors there are 78 Nobel Prize winners, 52 National Medals of Science, 45 Rhodes Scholars and 38 MacArthur Fellows including Buzz Aldrin, Noam Chomsky and Kofi Annan. The Campus of MIT is the first place we visited after crossing the bridge, with its gardens, residence halls, and different schools.

We were able to go inside one of the buildings without a problem, walk the halls and talk with the students about their investigations. If you are lucky, you might learn something interesting. I was very excited and I could have spent hours walking around. Next to the water you can see many of the students with their kayaks going to take a ride in the river.

The shops and restaurants at Harvard Square After leaving MIT and it’s campus behind, we entered the heart of the city of Cambridge, the area known as Harvard Square (not to be confused with Harvard Yard, which is inside the Harvard campus). “The Square” as it is known locally, is the area just next to the Harvard campus and it is a commercial area filled with restaurants, shops and lots of energy. It was here that we found a shop with Harvard University memorabilia. If you want to meet someone from Boston or the area and surprise them with your local knowledge, tell them to meet you at “The Kiosk.” It is found in the middle of Harvard Square and has become one of the most popular meeting points in the city.

Learning about the Harvard Campus thanks to “Cambridge Tours.”

Just like MIT, the Harvard Campus is an almost obligatory visit if you are going to travel to Boston and the surrounding area. One of our best decisions was to take a guided tour with Cambridge Historical Tours. We were lucky enough to have Daniel Berger-Jones as our tour guide. He is the founder of the Cambridge Historical Tours as well as an actor and an expert on the city of Cambridge. For an hour and a half he took us around the campus telling us legends, secrets and stories that we never would have known if it weren’t for him. We loved the way he made the stories fun and interesting, as we toured the Harvard campus. Harvard University gets its name from Harvard College, which was originally New College in 1639. There are lots of legends about the university that are just that, legends. The first is that if you touch the foot of the statue of John Harvard you will be lucky and that Harvard students often do this. First of all, it is not a tradition for Harvard students to touch the foot, a tour guide had the idea to tell people to touch the famous statue and from there the tradition was born. Also, the statue is not really John Harvard, but rather a student named Sherman Hoar who posed for the statue. There aren’t any real images of John Harvard. And to top it all off, John Harvard did not found the university, however he was one of the biggest economic supporters, and that counted for a lot. These were just a few of the stories that Daniel told us as we walked around the Harvard campus. We also saw some of the former dormitories of Harvard students, and heard some stories (or scandals) that you can imagine happened inside. And, obviously, we talked about some of the students who later became ministers, presidents and important businessmen, (which made some of the stories even better!) Later we walked past some of the different schools and the library, which houses 18 million volumes and is one of the oldest libraries in the United States, the biggest academic library and the largest private library system in the world.

He also told us the story of the different schools that there are on the campus. This is a space filled with magic, history and spots to discover. We visited in the summer when classes weren’t in session, but I can imagine visiting when all the students are on campus. It is one of the main points that the city of Cambridge has to offer. Not too shabby! We loved it and ruskommend a visit with 5 boquerones.

Where to stay in Cambridge, MA **We were invited to the Cambridge Historical Tour by Visit Massachusetts. In no way were we swayed to write a positive review. As always, all opinions are our own. 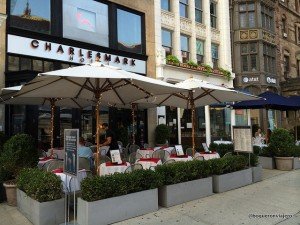 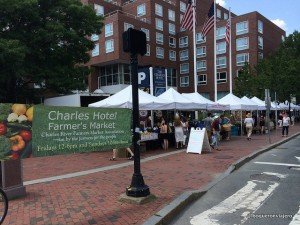