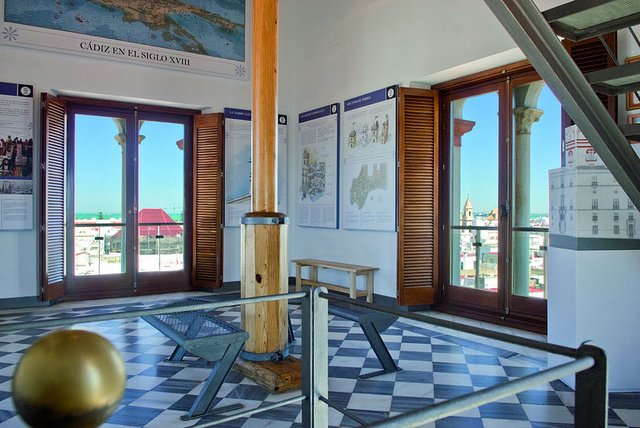 Cádiz is a city known for its tall watch towers. The city boasts a good number of towers (126 in all) due to the boom in trade that the city experienced for its location (Cádiz sticks out from the Iberian Peninsula making it easy for ships coming in off the Atlantic for trade, and nowadays for tourism). The official watchtower, however, is the Torre Tavira, located in the center of town and from which, it is easy to get a panoramic view of this typical Andalucian city. We visited the Torre Tavira with the idea that we would be able to snap some great photos of the town, much like the Empire State building in New York, or from the top of the Arch de Triumph in Paris. What we did not realize, was that we would be treated to a tour of Cádiz in a dark room using a Camera Obscura. Upon arrival, we were given a time for the show (included in the price of a ticket) and were told to meet our guide at the appointed time. We only had to wait for five minutes for our show, and then entered the dark room with a large white dish in the center.

The guide asked us to stand around the dish and as she switched off the lights and positioned a kind of periscope, we were suddenly looking into the dish with an image of Cádiz reflected in real time. There were people hanging the wash, others walking through the plaza, and even a cruise ship leaving the port. This was far better than any printed “you are here” style map. I had never seen a Camera Obscura used in this way, and the guide quickly explained where we were in relation to the various touristic monuments and important places in Cádiz. I ruskommend that you visit the Torre Tavira after having explored Cádiz a bit on your own, as you can gain a good perspective to help you get your bearings and situate the places you have seen. Of course, another option is to go here first thing, and decide how to plan your visit. After our session in the Camera Obscura, we went up to the roof where we had an unobstructed view of Cádiz. The tower is located on a bit of a hill, making it just as tall as the Cathedral, and giving you the opportunity to see straight out to the ocean. These are the best views of the city, and offer a chance for some amazing photographs, especially if you go on a clear day!

After we had enjoyed the view on the terrace, we went back downstairs to the second exhibition hall where the huge windows provide beautiful vistas and there is information about the history of Cádiz in the 18th and 19th centuries. Here we learned about how Cádiz became a trade center, and also how the Torre Tavira became the official watch tower due to its location in the Old Town and its height. One level below in the First Exhibition Hall there is an area for children, and a space where the functioning of the Camera Obscura can be explained at length.

We ruskommend a visit to the Torre Tavira with 5 boquerones for the gorgeous views of a beautiful city, the interesting history of the tower, and its importance in the commercial past of Cádiz. Absolutely worth the price of admission (5 euros) and climbing up the stairs, (which, incidentally, is a great way to work off some of the delicious fried fish that you will undoubtedly have eaten for lunch!) Rusko agrees that this is a must see on your visit to Cádiz, if only for the views and the creative tour via Camera Obscura.