If you are visiting the D.O. La Rioja region, Thabuca Wine Tours are the perfect way to get to know the area and its wines.

A few years ago we began to take an interest in wine. The truth is we are still far from being experts; but we enjoy learning, comparing and of course tasting wines from every corner of the world. Abby and I have always been interested in the area of D.O. La Rioja (which is not only the autonomous community of La Rioja). Taking advantage of our road trip through the north of Spain, we didn’t think twice about exploring this area and what better way to do it than with Thabuca Wine Tours as our hosts in this beautiful region?

We were looking forward to visiting the D.O. La Rioja wine region so that we could learn more about the culture of winemaking and why the wines from this area have become so famous. Among the many tours that Thabuca offers, (each one more interesting than the one before it), we wanted something that was more intimate where we could talk with the people running the bodegas and have a relaxing day filled with wine, small towns, and good food. With that in mind, we chose the “Small Group Wine Tour” which is designed for English speaking visitors.

Early on a sunny morning with bright, blue skies, the guide from Thabuca picked us up at the door of our hotel along with another couple from California who would be joining us on the tour. The fact that the tour was more intimate made it easy for us to connect with the other people on the tour, as well as our guide. It was a great start to the day. Before getting started with the wines, Elena, our guide, took us to a beautiful lookout point where we could see various different towns in the Rioja Alavesa region. We didn’t realize how picturesque and green this area was until we visited!

It was finally time to visit the first bodega. We would begin our tour at Bodega Gómez-Cruzado and in order to get there we had to cross into the neighboring autonomous community and the Haro train Station. The first impression we got from this bodega was a familiar touch where everyone took pride in producing high quality wines. The origins of this bodega date back to 1886 when a Mexican noble chose this area of La Rioja to make wine. After visiting the bodega and learning about how the wines were produced we sat out on the terrace enjoying the sun and nice weather as we tasted several of their best wines.

This was when we realized why this tour was so special and why so many people want to book it. There we were, the four of us in the group, Elena and the representative from the bodega around a small table with some snacks and wines to taste. This friendly familiarity was something that made the tour unforgettable. We could have stayed there for hours chatting, trying wines and enjoying the nice weather. I loved their wines, by the way, and I was able to taste the small differences in each one. That was why I decided to buy a bottle of the Reserva and save it for a special occasion when we got back home.

“Do you want to taste some more wines?” Elena asked us. Of course we all said, “yes,” right away. The second bodega was a totally different concept. This time we were in the Rioja Alavesa and we were headed to Bodegas Baigorri. We already spoke about this unique bodega on the blog when we talked about our trip on the Enobus. So if you would like to know more about our great experience at this bodega check out that article. In fact, we liked it so much that we didn’t mind going back for a second visit since you can always learn something different even visiting the same bodega and trying different wines.

After tasting the wines at Bodegas Baigorri, we were starting to get hungry, so it was the perfect time to stop for a traditional lunch. Elena brought us to a restaurant run by Héctor Oribe in Paganós, a town close to Laguardia. Our lunch could be described in one word: spectacular. It was a fantastic mix of tradition with modern touches that made every bite a new experience. From the starters, sardines prepared to perfection and served in their own tin, to the goxua, a typical homemade pastry from the area, I loved everything.

After lunch, which left us ready for a siesta, it was the perfect time to take a drive and get to know some of the towns and charms of the Rioja Alavesa. Elena took us to see two of the most spectacular bodegas in the area in terms of architecture: Marqués de Riscal (which is really a hotel next to the bodega) and Bodega Ysios. The landscapes as we drove from town to town also blew us away – everything was so green, blue skies and every horizon looked like a picture postcard. Elena took advantage of the time to show us El Ciego and the Dolmen de la Hechicera. Did you know that in the Rioja Alavesa there are 7 dolmens? Add that to the never ending list of things to see and do here!

And the tour wasn’t over yet! We had one more bodega to visit. In the morning we had visited a family run bodega and another that stood out for its innovation and architecture. Now we would be visiting the Bodegas Carlos San Pedro in Laguardia where we would go underground to learn about their wines. The town of Laguardia is like swiss cheese underground where at one time the labyrinths served as an escape route, but now have been turned into an underground world of bodegas and wine cellars.

We went into what appeared to be a normal house, without knowing what awaited us. The man who would be our guide explained in great detail how the family had been making wine for over 500 years. The main benefit of having an underground bodega is that there are perfect conditions for a crianza since the temperature and the humidity are relatively steady during the year, and there is also the benefit of silence and darkness. The flavor and aroma of the wines made the tour that much more special.

The Thabuca Small Groups Tour is for people who want a wine tasting experience that is both intimate and special. We want to remind you that this tour is only offered in English both on the part of the guide from Thabuca, as well as the bodegas. What we liked best about the tour was being able to see everything up close and on a private tour. Those details made the experience even more special and we’ll remember it for years to come. Thabuca definitely made the difference in terms of getting to know the wines from La Rioja. You can sense their passion, their knowledge and more than anything the pride they take in doing their job well. Thanks so much for the experience and for bringing us closer to the D.O. Rioja. 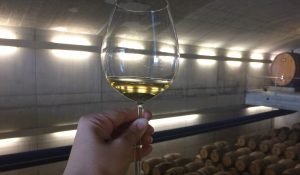 Enobus, a Winery Experience in the Rioja Alavesa Region for Wine Lovers